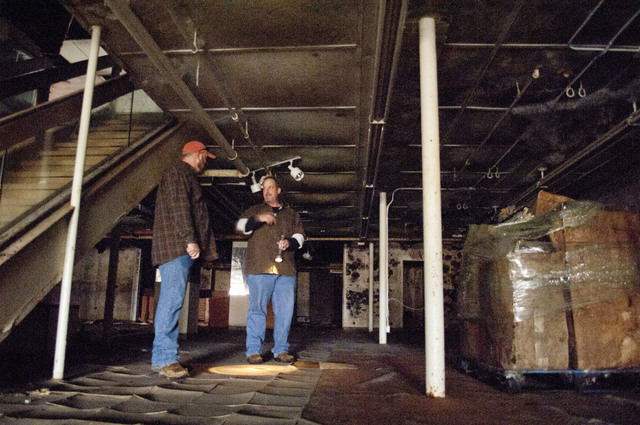 Tom Price, left, of Price Demolition, and Bill Hubbard of the asbestos removal company Kadima inspect the former Mansour’s department store building on Jan. 7. The hotel is slated to be torn down to make way for a new hotel.

http://lagrangenews.com/wp-content/uploads/sites/37/2016/02/web1_HotelUpdate01WEB.jpgTom Price, left, of Price Demolition, and Bill Hubbard of the asbestos removal company Kadima inspect the former Mansour’s department store building on Jan. 7. The hotel is slated to be torn down to make way for a new hotel.

LaGRANGE — Leveling of the former Mansours department store building on Lafayette Square to make way for a new hotel could begin by mid-March.

Asbestos removal and demolition crews may begin the work by March 15 and the task would likely take about a month, according to Bobby Carmichael, director of the Downtown LaGrange Development Authority.

Vertical construction of the new hotel, which will be a Marriott Courtyard, must begin by June 1 for developers to take advantage of a tax allocation district set up by local governments.

Architectural renderings are underway and Carmichael said developers hope to present them to City Council and the DLDA by March 15.

“We wanted to weigh in on the exterior facade,” Carmichael said. “There are different styles of Marriott Courtyards and we want to be able to tweak it to be sure it fits with our downtown.”

The city of LaGrange purchased the Mansours property in 2010 for $1.2 million and has deeded it to the DLDA for development. The city will also provide $300,000 toward demolition costs.

A 200-space parking deck will also be constructed adjacent to the hotel. The deck will be owned by the city, but is being financed with a $4 million grant from the Callaway Foundation.

Taxes from the hotel are projected to provide the city with about $200,000 per year in revenue over the next 20 years, according to city officials. The hotel is expected to employ about 30 people.

The hotel is expected to have about 100 rooms.

The project is being developed by Paramount Acquisitions, a subsidiary of the Carrollton-based construction company RA-LIN and Associates.