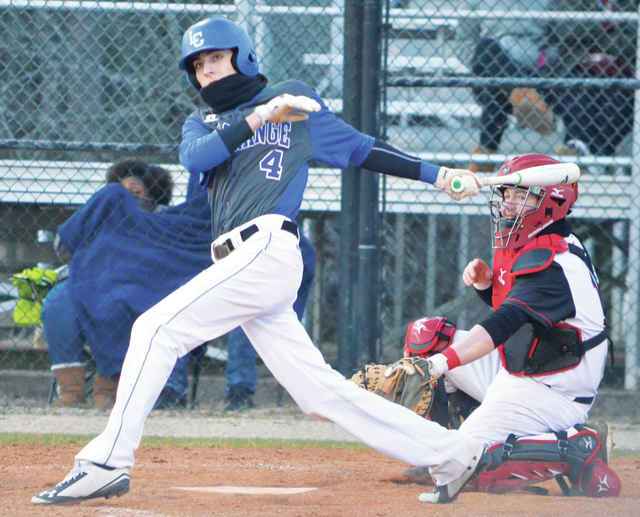 Jacob Vinson was one of seven LaGrange pitchers that threw a scoreless inning during Wednesday’s game. Kevin Eckleberry | Daily News

http://lagrangenews.com/wp-content/uploads/sites/37/2016/02/web1_baseball3-23.jpgJacob Vinson was one of seven LaGrange pitchers that threw a scoreless inning during Wednesday’s game. Kevin Eckleberry | Daily News

LaGrange’s Matthew Anderson had an RBI hit during Wednesday’s game, and he also played well at shortstop and was a part of three double plays. Kevin Eckleberry | Daily News

http://lagrangenews.com/wp-content/uploads/sites/37/2016/02/web1_baseball6.jpgLaGrange’s Matthew Anderson had an RBI hit during Wednesday’s game, and he also played well at shortstop and was a part of three double plays. Kevin Eckleberry | Daily News

HOGANSVILLE – It was a successful tune-up for the LaGrange Grangers.

Facing the home-standing Callaway Cavaliers in a preseason game on Wednesday, the Grangers scored five runs in the second inning to take control, and seven different pitchers combined for the shutout in an 8-0 victory.

Both teams will kick things off for real next week, with Callaway visiting Hardaway on Tuesday, and LaGrange hosting Hardaway next Thursday.

LaGrange was making its debut under new head coach David Smart, and he liked what he saw.

For Callaway, it was a new-look team that took the field.

The Cavaliers won a region championship and reached the quarterfinals of the state playoffs a year ago, but many of the players responsible for that success have moved on.

Among the players who were in the lineup against LaGrange, only a handful of them saw significant playing time a year ago.

It didn’t help that one of the players Hubbard was counting on, Noah Hammett, was unable to play because of an injury.

“He was our everyday shortstop until about a week ago,” Hubbard said. “What happens is that moves everybody around.”

Both teams used a bunch of pitchers.

While LaGrange used one pitcher every inning, six Callaway pitchers appeared in the game.

LaGrange’s pitchers were all effective.

Jake Howard got the start and worked around an infield single to throw a scoreless first inning, and Jake Farrar, Jacob Vinson, Cj Harman, Ben Anderson, David Sweat and Matthew Anderson each worked a shutout inning as well.

Matthew Anderson threw the seventh and final inning, and he retired all three batters he faced, all on strikeouts.

In the fourth inning, Callaway got a pair of runners on base with not outs, but Harman got out of the jam without any runs scoring, thanks in large part to an inning-ending double play.

That was one of three double plays LaGrange turned to kill potential Callaway rallies.

“We don’t have a lot of swing and miss guys on our staff,” Smart said. “We can turn some double plays this year. They did a good job of that.”

Offensively, LaGrange did most of its damage in the early going.

The Grangers scored their first run in the first inning, with Farrar reaching on a base hit before later scoring on a wild pitch.

LaGrange busted it open in the second inning with five runs on three hits, two walks, a hit batter and an error.

Andrew Askew reached on an error leading off the inning, Sweat was hit by a pitch, and Trevor Norris walked to load the bases.

Ben Anderson then worked his way on with a walk to drive in a run and make it a 2-0 game.

Howard followed with an RBI single to plate another run, and Farrar’s two-run single pushed the lead to 5-0.

Champ Willis then had a nice at-bat, and his sacrifice fly brought in the inning’s fifth and final run.

Willis Kemp, who walked in the first inning, had a base hit, but Callaway pitcher Austin Wilson got the final two outs without any more runs scoring.

LaGrange added another run in the fourth inning, with Matthew Anderson delivering a two-out, RBI single.

LaGrange capped the scoring in the fifth inning.

Sweat legged out an infield single leading off, and he later scored when Howard reached on an error.

“We had some quality at bats,” Smart said. “We made some quality outs as we call them. I thought we did a pretty good job with two strikes competing at the plate. Even some of those strikeouts were lengthy at bats.”

Callaway wasn’t able to get much done at the plate.

The Cavaliers had a handful of base runners, but they were all stranded.

“The pitching was OK,” Hubbard said. “We gave up one big inning. We gave up a five-spot in the second. Defensively, we didn’t play very well that inning, and we left some pitches up.”