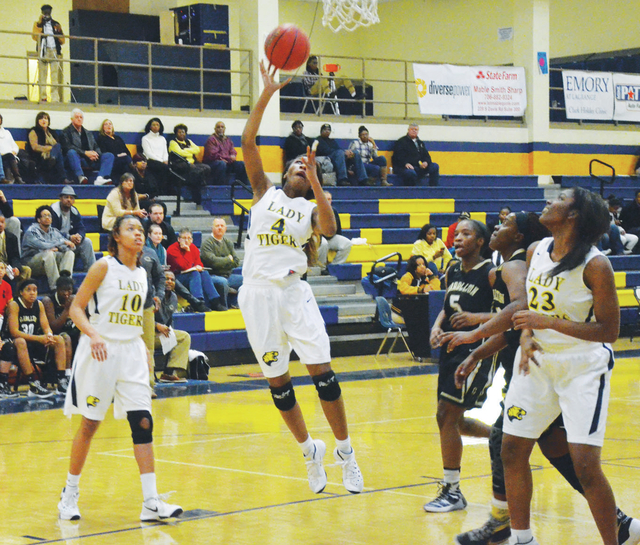 Troup’s Jedda Madden gets a shot away during a game earlier this season. Madden had 15 rebounds during Tuesday’s region-tournament victory over Fayette County. Kevin Eckleberry | Daily News

http://lagrangenews.com/wp-content/uploads/sites/37/2016/02/web1_troup-basketball2.jpgTroup’s Jedda Madden gets a shot away during a game earlier this season. Madden had 15 rebounds during Tuesday’s region-tournament victory over Fayette County. Kevin Eckleberry | Daily News

LAGRANGE – They’ve already punched their ticket to the state tournament.

With that accomplished, the Troup Lady Tigers will now try to earn the right to host a state-tournament game next week.

Troup secured its state invitation with Tuesday’s come-from-behind 47-40 win over Fayette County in the first round of the Region 5-AAAA tournament.

Next up is a semifinal showdown against Woodward Academy, and that game will be played at Carrollton High School today at 6 p.m.

The winner of today’s game will not only advance to Friday’s region-championship game, but will be at home for a state-tournament game.

The loser of today’s game will play in the third-place game on Friday against either Carrollton or Whitewater and will be on the road for a state game.

Troup outscored Fayette County 17-3 in the fourth quarter, though, to earn a state bid for the first time since the 2011-2012 season.

Making the win even more impressive, it came on Fayette County’s home floor.

“They had a good fan presence there too,” Troup head coach Carla Thornton said. “My girls kept their composure.”

The first one was close, with Woodward Academy hanging on for a 55-52 road win.

“We were in it,” Thornton said. “We just couldn’t make our shots.”

The rematch was a bit more one-sided, with Woodward Academy winning 54-37 at home.

On Friday, both Callaway teams, along with the LaGrange Grangers, will play in the semifinals of their region tournaments.

The Grangers, the top seed in the Region 1-AAAAA tournament, will host the Northside Patriots on Friday at 7:30 p.m.

Northside, which is the tournament’s number four seed, beat fifth-seeded Harris County 74-68 on Wednesday to reach the semifinals.

Northside and LaGrange played in the final game of the regular season last week, and it was a thriller.

LaGrange’s Mike Hardy scored with a few seconds left in overtime to give his team a 71-68 victory that wrapped up the number one seed.

The Grangers will be back on the court on Saturday to play for a region title, or for third place.

Also on Friday, Callaway’s girls’ and boys’ teams will play in the semifinals of the Region 5-AAA tournament at Central-Carroll.

The Lady Cavaliers are seeded second, and they’ll play the third-seeded Pepperell Lady Dragons at 4 p.m.

Pepperell beat Central-Carroll 65-37 on Wednesday in a first-round tournament game.

The Cavaliers, the top seed in the tournament, will play the Central-Carroll Lions at 8:30 p.m. on Friday.

Central-Carroll kept its season alive by beating Cedartown 45-31 in a first-round game on Wednesday.

Callaway’s teams will play again on Saturday, either for the region championship, or for third place.