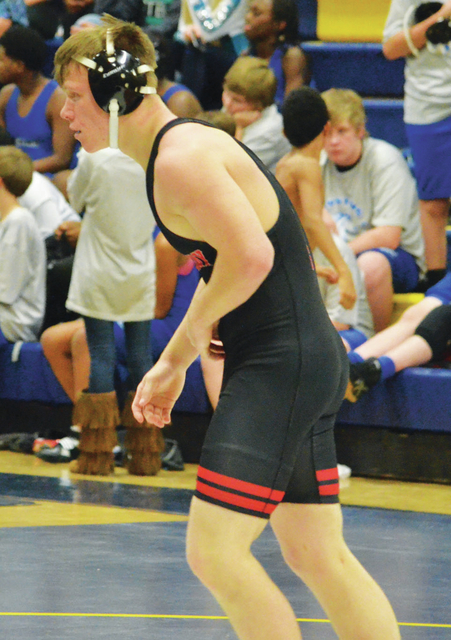 Hudson Newton, who finished fifth in the state a year ago, will be one eight Troup wrestlers participating in the state finals today. Kevin Eckleberry | Daily News

http://lagrangenews.com/wp-content/uploads/sites/37/2016/02/web1_troup-newton.jpgHudson Newton, who finished fifth in the state a year ago, will be one eight Troup wrestlers participating in the state finals today. Kevin Eckleberry | Daily News

LaGrange’s Emmanuel Mann is in the state finals for the second straight year. Mann will be joined by four of his teammates in the finals this year. Kevin Eckleberry | Daily News

http://lagrangenews.com/wp-content/uploads/sites/37/2016/02/web1_LHS-mann-2.jpgLaGrange’s Emmanuel Mann is in the state finals for the second straight year. Mann will be joined by four of his teammates in the finals this year. Kevin Eckleberry | Daily News

LAGRANGE – A year ago, Troup’s Hudson Newton and Callaway’s Justin Kiss each earned a place on the podium at the state wrestling finals.

Today, those two, along with 16 other wrestlers from the local schools, will begin what they hope will be a successful stay in the state finals.

The action gets under way at 2 p.m. today, with wrestlers from all six of the state’s classifications converging on the Infinite Energy Arena in Gwinnett County for the three-day competition.

Among the local schools, Troup leads the way with eight wrestlers in the Class AAAA finals, including Newton, who finished fifth in the 285-pound division a year ago.

Callaway has five wrestlers in the Class AAA finals, and that includes Kiss, who earned a sixth-place finish at state during his freshman season.

LaGrange has five wrestlers in the Class AAAAA finals, which was a big improvement from a year ago when there was only one Granger in the finals, and that was Emmanuel Mann.

To reach the state finals, a wrestler had to finish eighth or higher in his weight division at the state sectional.

For Troup, it’s the end of the road for Newton, who has enjoyed an exceptional high-school career both as a wrestler, and a football player.

A year ago, Newton made it to the semifinals and was two victories away from a title when he lost to Kenneth Brinson, the eventual state champion.

After losing his next match, Newton rebounded to win the fifth-place match.

At last week’s state sectional, Newton earned his spot in the state finals by finishing fourth in the 285-pound division.

Newton, Upchurch, Seals, Robinson and Jeremiah McClendon are each in the state finals for the second straight year.

For Callaway, Kiss came into the state sectional with an unbeaten record.

He lost twice at the sectional, but he still finished fourth at 106 pounds, which was plenty good enough to make it through to the finals.

That’s the same weight class Kiss wrestled at a year ago when he finished fifth in the state finals.

Thomas, a senior, is making a return trip to the state finals, and this year he’ll be looking to secure a place on the podium.

A year ago, Mann was a lonely man for LaGrange as the team’s only representative in the state finals.

This year, he’ll be joined by four of his teammates.

One of those wrestlers is Guy Wegienka, who continued his sensational season with a second-place showing in the 189-pound division at the Class AAAAA state sectional.

Wegienka’s lone loss in the sectional came against Torres Finney of Jones County in the finals.

LaGrange head coach Scooter Weathers said Finney has only had two matches this season that were decided by decision, and they both came against Wegienka.

Wegienka was in the state finals as a sophomore, but he missed out a year ago before making it back this year.

Mann fell to Gabe Smith of Camden County in the finals, and that was only his second loss of the season.

Also earning a spot in the state finals for LaGrange is Matt Watford (152 pounds), who was fifth at the state sectional.

Dakota Wilson (126 pounds) and Dominique Copeland (160 pounds) will also be wrestling in the state finals.