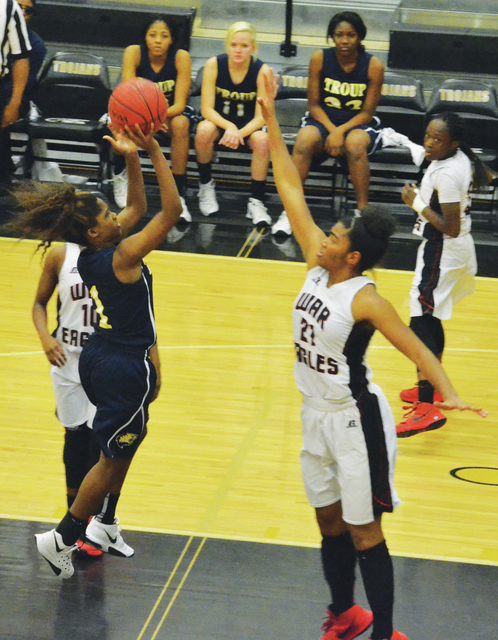 Troup’s Jedda Madden gets a shot away during the second half of Thursday’s loss to Woodward Academy in the Region 5-AAAA tournament. Troup will play Whitewater in the third-place game today. Kevin Eckleberry | Daily News

http://lagrangenews.com/wp-content/uploads/sites/37/2016/02/web1_troup1-4.jpgTroup’s Jedda Madden gets a shot away during the second half of Thursday’s loss to Woodward Academy in the Region 5-AAAA tournament. Troup will play Whitewater in the third-place game today. Kevin Eckleberry | Daily News

Troup’s Keya Sands goes to the basket during the first half of Thursday’s game against Woodward Academy. Kevin Eckleberry | Daily News

http://lagrangenews.com/wp-content/uploads/sites/37/2016/02/web1_troup3-1.jpgTroup’s Keya Sands goes to the basket during the first half of Thursday’s game against Woodward Academy. Kevin Eckleberry | Daily News

Troup’s Kwyneshia Spence gets a shot away during the second half against Woodward Academy. Kevin Eckleberry | Daily News

http://lagrangenews.com/wp-content/uploads/sites/37/2016/02/web1_troup2-3.jpgTroup’s Kwyneshia Spence gets a shot away during the second half against Woodward Academy. Kevin Eckleberry | Daily News

CARROLLTON – Troup’s Carla Thornton wanted to coach on her birthday.

For that to happen, the Troup Lady Tigers needed to win their first game in the Region 5-AAAA tournament, and they made that happen in dramatic fashion.

Facing Fayette County on Tuesday, Troup rallied from a seven-point deficit in the fourth quarter to win 48-40, a victory that guaranteed the team two more games in the region tournament.

After losing to Woodward Academy 44-30 on Thursday, Troup will play Whitewater today at 4 p.m. in the third-place game at Carrollton High.

Today is Thornton’s birthday, so she got her wish.

“I just wanted to play on my birthday,” Thornton said. “I told them, let’s go play hard, have a good time.”

Had Troup beaten Woodward Academy, it would have played in tonight’s region-championship game against Carrollton.

The Lady Tigers had a hard time getting their offense in gear, and after falling behind by 12 points at the half, they came no closer than 10 points in the second half.

“We had chances,” Thornton said. ” We got good looks. We didn’t finish. That’s the difference between tonight and (the Fayette County game). We had the same looks, we just didn’t finish.”

After falling behind 6-2, Spence completed a three-point play to get Troup within one, but Woodward Academy finished the first quarter on a 7-0 run to take a 13-5 lead.

Tyler Collins hit a 3-pointer at the first-quarter buzzer to give Woodward Academy an eight-point lead.

The Lady Tigers were down by 10 points in the second period when Sands scored to begin a 5-0 run that made it a five-point game with 2:45 left in the half.

Once again, though, it was Woodward Academy finishing a quarter with a flourish.

When Jade Allen made a 3-pointer as the first half ended, it capped an 8-0 run, and Woodward Academy had a 23-11 lead.

It was a tough first half for the Lady Tigers, who were only 4-of-18 from the field while committing 16 turnovers.

The Lady Tigers didn’t have any more success offensively in the third quarter, managing just six points, and as the final period began, they trailed 32-17.

Woodward Academy scored the first basket of the fourth quarter to go up 34-17, and that’s when Troup put together its best stretch of the game.

Beginning with a Gabby Lockhart basket, the Lady Tigers went on an 8-1 run, and when Sands scored with 5:03 to play, it was a 10-point game.

Woodward Academy responded with a 6-0 run, though, to put the game away.

In today’s game, Troup will be facing Whitewater for the third time, and it lost both games in the regular season.

Troup will be on the road for its state-tournament opener on Tuesday.

It’s the first time the Lady Tigers have been in the state tournament since the 2011-2012 season when they reached the state quarterfinals.