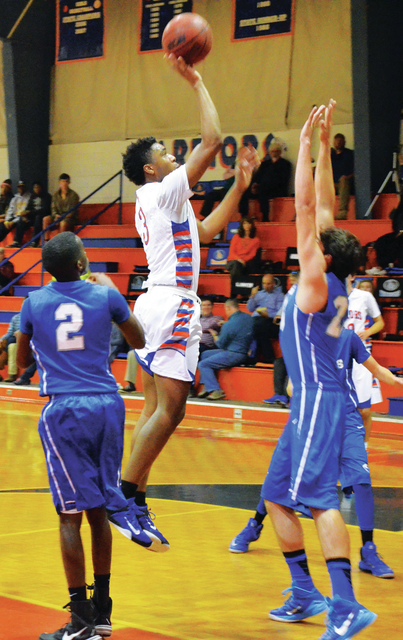 LaGrange Academy’s Alex Wilson gets a pass away to D.J. Burks during the first half of Thursday’s victory over Griffin Christian. Kevin Eckleberry | Daily News

http://lagrangenews.com/wp-content/uploads/sites/37/2016/02/web1_LGA4.jpgLaGrange Academy’s Alex Wilson gets a pass away to D.J. Burks during the first half of Thursday’s victory over Griffin Christian. Kevin Eckleberry | Daily News

LAGRANGE – They’re starting to figure things out, and at just the right time.

For the first time this season, the LaGrange Academy Lady Warriors are on a winning streak.

After beating Solid Rock 38-37 in an overtime thriller earlier this week, LaGrange Academy knocked off Griffin Christian 37-31 on Thursday for its second straight win.

LaGrange Academy will be on the road against Bethlehem Christian today, and it will be the final game of the regular season.

The Lady Warriors will be the number five seed for the GISA Region 1-AA tournament that they will host next week.

“Every game we’ve had, every practice we’ve had, it’s all about getting ready for (the tournament),” LaGrange Academy coach Mike Petite said. “Now we’ve won back-to-back games, we’re playing with some confidence. They’re starting to understand it.”

In Thursday’s games, Leah Major and Sydney Anderson both had big offensive efforts.

Leah Major contributed 13 points, and she knocked down 2-of-4 attempts from long range.

The Lady Warriors only scored 10 points in the second half, but that was enough thanks to a stingy defensive effort.

In the win over Solid Rock, Anderson got hot for LaGrange Academy and scored 21 points, and she was 3-of-6 on 3-point attempts.

One of Anderson’s 3-pointers came in overtime as LaGrange Academy outscored Solid Rock 5-4 to earn the hard-fought win.

LaGrange Academy will play the number four seed in the first round of the region tournament on Tuesday at 7 p.m.

A win, and the Lady Warriors will be in the semifinals, and they’ll also qualify for the state tournament.

“We win that game, we’re in state,” Petite said. “That’s our goal, is to win our first-round game and qualify for the playoffs.”

LaGrange Academy’s boys’ team had no trouble with Griffin Christian on Thursday, rolling to a 47-28 victory.

“We just keep working, keep getting better,” Gaylor said. “It was good to get everybody in.”

Lincoln Anderson led the Warriors with 14 points, and Zach Callaghan made three 3-pointers and scored 13 points.

“A couple of guys got going,” Gaylor said. “Zach got going with his shot and scored 13 tonight. He needed to see some shots go in.”

LaGrange Academy will try to end the regular season with a win at Bethlehem Christian tonight.

If the Warriors win, they would still have a chance to be the number two seed for the region tournament, although they’d have to win a coin flip.

If LaGrange Academy loses today, it would be the three seed.

“It’ll be a good game,” Gaylor said. “It was here, and it’ll be competitive there.”

If LaGrange Academy is the number two seed, it will play on Monday at 7:30 p.m.

If the Warriors are seeded third, they’ll play on Tuesday at 8:30 p.m.