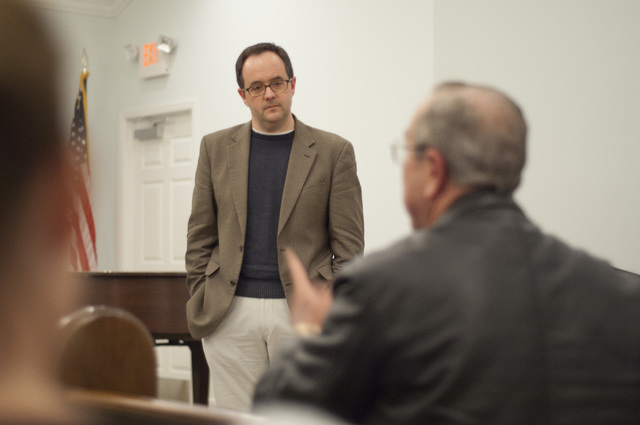 LaGRANGE — People concerned about the closure of a temporary warming center for the homeless heard some welcomed news Thursday at the final of four town hall meetings held by Mayor Jim Thornton.

At the beginning of the meeting inside Dunson United Methodist Church on Barnard Avenue, the mayor announced the center will re-open at a new location offered by New Ventures, a workforce training agency in LaGrange.

The new location on East Lukken Industrial Drive is undergoing renovations to become a workforce training center for New Ventures, and 2,500 square feet of the location will be used by the Troup County Homeless Coalition as a temporary warming center throughout the rest of the cold weather season, according to Mike Wilson, New Venture’s director of marketing and sales.

“We’re at a point where we’re able to offer about 2,500 square feet,” Wilson told the crowd. “Interface (Flooring) is on board and they’re going to donate carpet tiling, Jackson Heating and Air is going to hook up some heating and Southern Style Pressure Washing is putting a fresh coat of paint on. All of this has transpired since about 2 p.m. (Wednesday).”

The center will open Saturday, according to Jessica David, leader of the Emmaus Shelter, which previously operated a warming center at the city-owned Dawson Street School before the city fire marshal determined the space was unsafe for human habitation.

Public Safety Chief Lou Dekmar, who helped form the Troup County Homeless Coalition, appealed to the crowd to volunteer their time and return to their churches and ask for the faith community to be more involved in the solution.

“This short-term shelter gives us a temporary solution,” Dekmar said. “But we need supervisors from the faith community and we need money for food.”

Dekmar also went on to address criticisms from community members that the city has turned a blind eye toward homelessness.

“This notion that the city does not care is not accurate,” Dekmar said. “The city has supported mental health courts, donated money and actively supported efforts to address homelessness.”

While the issue of homelessness was on the minds of attendees, it wasn’t the only topic raised.

The mayor noted that the nearby Greenville Street bridge over the CSX railroad has been closed by the Georgia Department of Transportation until further notice. GDOT recently inspected the bridge and ruled it unsafe for passage.

“The good news is that that bridge was already on GDOT’s radar,” he said. “I’m very hopeful we’ll be able to expedite that process and get the bridge replaced.”

As with the other three town hall meetings, questions about the city’s parks and recreation facilities — particularly Granger Park and its playground — were raised by attendees.

The mayor noted that the Granger Park master plan to overhaul the facility is on hold while a long-term source for maintenance funding is decided. In the meantime, though, he said the city was “willing and able to go forward” with some capital investments, such as the replacement of outdated equipment.

Thursday’s town hall was the shortest of all four of the meetings, lasting less than an hour. The mayor and City Council will meet in April for a retreat where they will discuss the city’s budget and suggestions raised in the town hall meetings.