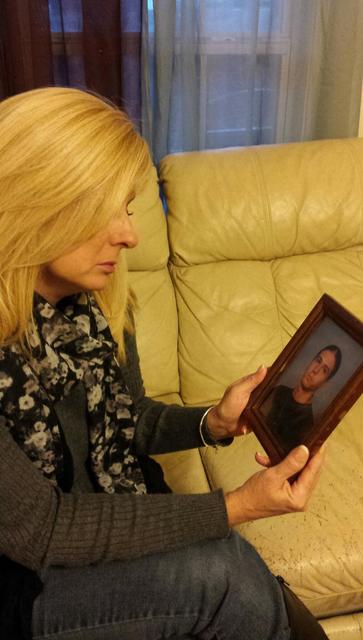 Lisa Benefield said this was all that was left of her son Levi Hart’s car after a crash on a back road outside Hamilton on March 20, 2006. Hart was reaching to pick up his dropped lighter when he lost control of the car and slammed into another vehicle.

http://lagrangenews.com/wp-content/uploads/sites/37/2016/02/web1_2016-02-049516.30.13-2.jpgLisa Benefield said this was all that was left of her son Levi Hart’s car after a crash on a back road outside Hamilton on March 20, 2006. Hart was reaching to pick up his dropped lighter when he lost control of the car and slammed into another vehicle.

Levi Hart stands in front of a car in this undated photo. Hart was severely injured in a wreck in Hamilton Road in 2006, seven years after his older brother lost his life in a wreck.

http://lagrangenews.com/wp-content/uploads/sites/37/2016/02/web1_Levi-2.jpgLevi Hart stands in front of a car in this undated photo. Hart was severely injured in a wreck in Hamilton Road in 2006, seven years after his older brother lost his life in a wreck.

Johnathon Phillips, shown in this undated photo provided by his family, died at age 17 in a wreck on Rosemont Road, about a mile and a half from his home.

http://lagrangenews.com/wp-content/uploads/sites/37/2016/02/web1_Johnathon-10th-grade-1.jpegJohnathon Phillips, shown in this undated photo provided by his family, died at age 17 in a wreck on Rosemont Road, about a mile and a half from his home.

Lisa Benefield gazes at a picture of her son Johnathon Phillips, who died in a wreck April 12, 1999. Benefield believes he may have been distracted, reaching for a CD, when the collision occurred.

The mother of two teenage boys and an infant daughter still remembers the exact moments before her life was forever changed — the sun shining in the bright spring sky, feeling under the weather after catching some kind of virus and the silence of her home being simultaneously interrupted by the ringing of the telephone and someone knocking at her front door.

Her husband answered the phone, and in a matter of seconds, life as they knew it was gone for good.

Their oldest son, Johnathon Phillips, 17, had been in a horrific accident on Rosemont Road, just a mile and a half from their home. The parents were asked to come to the hospital right away.

The worst news a parent can receive

A law enforcement officer found part of her son’s billfold on the side of the road.

“I had given him a check to get some stuff at the convenience store because I was sick,” Benefield explained. “He was going to the store to buy me some chicken noodle soup … His bill fold had gone flying in the accident … The wreck tore the check apart, except for the part with my name, address and number on it.”

When Benefield and her husband reached West Georgia Medical Center, a team of doctors and officers met them in the emergency room.

“When we got there, they pulled us into a room and said he didn’t make it … he actually died at the scene and they needed someone to identify his body,” she said. “I said, ‘I wanted to do it, because I wanted to see him,’” Benefield paused as the tears rolled down her cheeks. She did not speak for a few minutes.

“It was something that I felt like I had to do,” she said as she wiped away the tears. “It felt so unreal. Everyone was telling us Johnathon was gone, but I didn’t believe it … I had to see for myself … I’m thankful he didn’t suffer.”

According to troopers with the Georgia State Patrol who investigated the accident, it appeared the van the teen was driving ran off the right side of Rosemont Road, over-corrected, ran off the left side of the road and slammed into a tree.

While the troopers never specifically pinpointed distracted driving as the cause of the crash, Benefield believes her son may not have been paying attention to the road.

“This was before everyone had cellphones. He wore those pants with big pockets and he kept them stuffed full of CDs,” she said. “The CD player was on the bottom, near the floorboard (of the vehicle). We never knew for sure, but I could only imagine he was leaning over to pull out one of the CDs or put one in and that’s when the accident happened.”

Benefield said by the grace of God, most of the crash was cleaned up by the time she drove by it on the way to the hospital. She said she has never seen pictures of Johnathon’s wreck — and never wants to.

Moving forward, then pulled back

The days that followed her oldest son’s death were some of the darkest hours she’s ever experienced. Benefield leaned on her faith in God, family, friends and coworkers at Milliken to get through that time, and honor her son.

“He was very artistic. He could draw very well. He would have made something of himself,” she said with a smile. “He was very popular in school … outgoing, very friendly and cared about people … and that smile. That’s what people tell me they remember about him the most, he always had a smile … and dimples.”

She also turned to Johnathon’s friends, who took her second oldest son, Levi Hart, 14, under their wing.

“It was really hard for Levi because it was just a shock. It changed him because he didn’t have that role model anymore,” Benefield explained. “But some of Johnathon’s friends took over for him. He had a multitude of friends. Levi even went to prom his freshman year with one of Johnathon’s girlfriends because she asked him to go.”

But just when Benefield thought she had placed her worst fears behind her, seven years later another phone call would change her life again.

This time it was early in the morning on March 20, 2006, just as she was leaving for work. Someone left a message on her cell phone.

“It was so freaky because they said, ‘Miss Benefield, your son has been in a wreck and he’s laying on the side of the road and he’s asking for you.’ I’m like, ’Is this someone’s idea of a joke?’ I called them back in a panic and I thought, ‘Please not again.’”

Levi, then 21, was driving on a back road to work in Columbus. He was almost to the town of Hamilton when he lost control of his car and was hit by another vehicle when he crossed into oncoming traffic.

“He got very lucky. There happened to be two nurses riding to work together a couple of cars behind him. When they came up on the accident, they helped him and they called me on my cell phone,” Benefield said.

Levi was taken to a Columbus hospital for treatment. Benefield passed out the first time she saw him.

“I woke up and they (hospital staff) were going to admit me because they thought I had a seizure. I said, ‘No, you don’t understand. I’ve been through this before,’” she explained.

“He said he was smoking. He was trying to light his cigarette, dropped his lighter, went to reach for it and that’s when he felt himself go off the right shoulder (of the road),” she said. “So he jerked the steering wheel back and the car went sideways across the road … into the other lane. The lady coming hit him.”

But Hart and Benefield did not realize just how bad the accident was until they went to pick up the car from the tow yard a week later.

Only a partial shell of the vehicle remained. The man at the shop said they collected the car in pieces and all of the damage was from the crash — no extraction tools or emergency equipment was used at the scene. Hart had been ejected clear from the vehicle, like a fighter pilot ejects from his plane.

“There was nothing to take home,” Benefield remembered. “It was like, ‘how in the world did he make it out of there?’ His shoes were still sitting neatly in the floorboard. His seat belt was still buckled. The collision just sucked him straight out of the top of the car.

“I feel like Johnathon was there helping him … God’s hands were definitely in it,” she continued. “If you see Levi’s car … there’s just no way he would have survived without either one of them there.”

“A great percentage of those was from distracted drivers either striking vehicles in the rear or people running off the roads then over-correcting,” Raines said. “Over and over my troopers are getting statements from these drivers such as, ‘I spilled my coffee.’ Or, ‘I dropped my phone.’

“People get distracted by their cell phones, texting, fiddling with the radio or parents reaching back to tend to their child. It’s now an epidemic we deal with on a yearly basis,” Raines added.

Post 2 Trooper Brad Turner told the Daily News he has witnessed people driving while putting on makeup, eating food and even reading a newspaper stretched across the steering wheel.

Benefield said after reading the Daily News’ initial article on distracted driving she felt compelled to share her sons’ stories with the community.

“I want people to pay attention,” she stated. “When you’re in that vehicle, you don’t understand how much risk there is. You’re responsible for yourself, everyone in the car and others on the road.

“I see it everyday … people weaving on and off the road. You drive up next to them and they’re on their cell phone texting away,” Benefield continued. ” … Just drive, get where you’re going and then you can play with your gadgets … People tend to think they’re invincible and it’s not going to happen to them. But until it happens to you, you don’t know.”

Benefield said she hoped at least one person thinks about this story the next time they get behind the wheel.

“If this makes a difference in just one person’s life … then I know Johnathon didn’t die in vain,” she said.