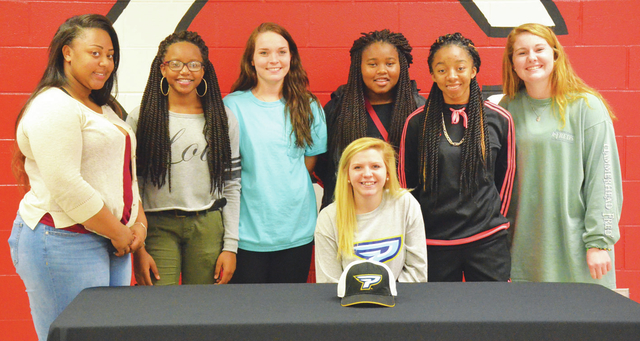 Molly Hubbard celebrated with some of her Callaway softball teammates on Friday. Kevin Eckleberry | Daily News

http://lagrangenews.com/wp-content/uploads/sites/37/2016/02/web1_hubbard1.jpgMolly Hubbard celebrated with some of her Callaway softball teammates on Friday. Kevin Eckleberry | Daily News

Hubbard didn’t put up gaudy numbers, but she was a player who almost always did the right thing on the softball field, which Summerlin appreciates.

“She’s just a steady player,” Summerlin said. “She makes the routine plays (at second base). She can hit wherever you need her to hit. She runs the bases well. She just has a lot of the intangibles that are going to help her.”

For the past four years, Hubbard was a big part of the Callaway softball program.

Now, Hubbard will be taking her softball skills to the next level.

Hubbard has signed a letter of intent to play softball at Point University, and she made that announcement during a signing-day ceremony on Friday.

“I didn’t want to go far,” Hubbard said. “It’s a good school. I visited there, and it’s pretty, and they’re really nice. And if anything happens, I’ll be close to home.”

Hubbard said the chance to play on the next level is the fullfillment of a goal she’s had for a long time.

“Since I was younger, I always said I want to go to college and play softball,” she said. “My dad, he always said that I was going to do to do this. He’s excited.”

Hubbard is the third member of last season’s Callaway softball team that is going to get an opportunity to play college softball.

Another member of that team, Keshonna Terrell, is going to play college softball, and she is still weighing her options.

“We’ll have four people sign,” Summerlin said.”That’s a testament to them and what they’ve done. They work hard. It’s good to have a group like that. They’ve done the things they needed to do, and they’ve laid the foundation. This is what they’ve worked for, and now they’ll get an opportunity to go play. I think they’ll be successful, all of them.”

Hubbard said it has “been a lot of fun” playing with her fellow seniors.

“It’s scary, too, because it’s almost over, and I’m not going to be play with them again,” Hubbard added. “It’s really bitter-sweet.”

OF NOTE: For more photos from Friday’s signing-day ceremony, go to facebook.com/LDNsports