LaGrange man fed up with gunshots near home 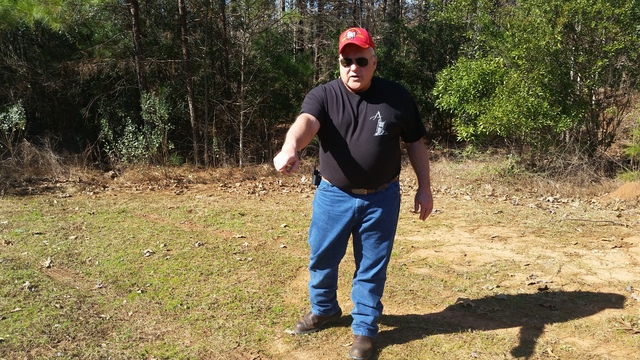 Keith McCain points to where he and LaGrange police officers found two different types of shell casings and tire treads near his home where someone has shot their weapons three times in the last month.

http://lagrangenews.com/wp-content/uploads/sites/37/2016/02/web1_ShotsFired2.jpgKeith McCain points to where he and LaGrange police officers found two different types of shell casings and tire treads near his home where someone has shot their weapons three times in the last month.

LaGRANGE — For several years, Keith McCain and his wife lived in peace in their home off Nashua Drive in the Lexington Park neighborhood on the southeastern area of the city.

McCain stated that all changed Jan. 15. He and his wife were in the den watching TV about 8:30 p.m. when they heard loud popping sounds in the woods behind their home.

The former United States Marine said he immediately knew it was gunfire, and he called the LaGrange Police Department.

He repeated the same routine when he and his wife again heard the gunshots about 8:30 p.m. Jan. 27. When it happened again five days later, on Feb. 1, just before 5:30 p.m. while his wife was outside, she was shocked. McCain got mad.

“I just ran out the door towards the area hollering at the top of my lungs,” he said. “But I wanted to see who it was … but I mainly went out there because it pissed me off. It was the third time … twice in less than a week. I was pissed.”

“People don’t need to be allowed to come in and disrupt your peace like that,” McCain added. “Plus, it’s against the law to shoot off a weapon within the city limits.”

Whoever it was sped off in an unknown make and model white car, he said.

Roughly 50 meters from the back of McCain’s home sits the end of a paved road and lots of woods.

According to the former Marine, it is also where someone apparently likes to park their cars and shoot off their guns.

“The first time, there was a pause between the first two discharges,” he said. “The second time, there were guns firing at the same time … just a whole lot of 17 magazine of 40 mm (shell casings).”

McCain said he and LaGrange police found plenty of evidence each time a 911 call has been placed.

The secluded area is close to his neighbor’s backyards, some of whom have children, and also less than a half mile from Interstate 85, which can be seen through the thinned February trees.

McCain is apprehensive about the potential danger of bullets being fired so close the highway with passing motorists and nearby homes.

“My concern is for my wife. I don’t want anything to happen to her. As a Marine, you learn to think of others before you think of yourself,” he said.

” … I’d like to see community awareness increase and more people report it, because police look for patterns,” McCain continued. “These people are going to keep doing this and go somewhere else. They need to get caught before they harm someone else, someone innocent. They don’t need to be allowed to do this.”

LaGrange Police Sgt. William Nelson said the department has stepped up patrols in the area, but McCain said he is still on the lookout for the violators too.

“I want to watch out for my safety, but I want to be a good citizen, do my part and help the police,” he stated. “They need to stop these guys. The general populous needs to get involved and not just leave it to the police officers.”

McCain said he will also inquire with the city about blocking off the area behind his home so people cannot park there.