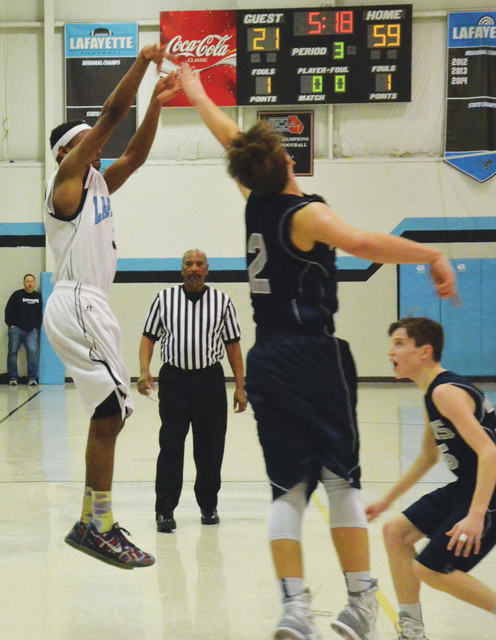 LAGRANGE – Another state-tournament game, and another blowout victory.

After winning their state opener by nearly 60 points earlier in the week, the Lafayette Christian School Cougars were back home on Friday for a second-round game against Eastgate Life Academy.

While the game was a bit more competitive than the 96-39 first-round win over Peachtree Academy , there was never much doubt about the outcome, with the Cougars easing their way to an 82-34 victory.

The Cougars will play a final-four game on Friday at Gordon State College, and if they win, they’ll play for a state title the following day.

The Cougars improved to 21-0 with Friday’s one-sided win, and they’ve only been pushed in a few of their games this season.

Against Eastside, Lafayette Christian surged to a 25-13 lead after the first quarter, and the lead was 53-19 at the half.

Eastside managed to find some offensive success in the first quarter, but it only had six points in the second quarter when Lafayette Christian turned up its pressure defense.

Senior guard Jemi Reed, who led all scorers with 34 points, made five 3-pointers in the first half and scored 18 points.

Lafayette Christian head coach Jarred Pike said the goal was to put the game away early.

“That’s pretty much every game,” Pike said. “We’ve got guys that can play. That’s what I tell them, don’t mess around, don’t get in foul trouble. Don’t give them any life, to start to think it’s a ballgame.”

Reed, in addition to his 34-point outburst, also had 10 rebounds, 10 assists and six steals, giving him a triple-double.

Mobley pulled down eight rebounds, and Sands had seven assists and four steals.