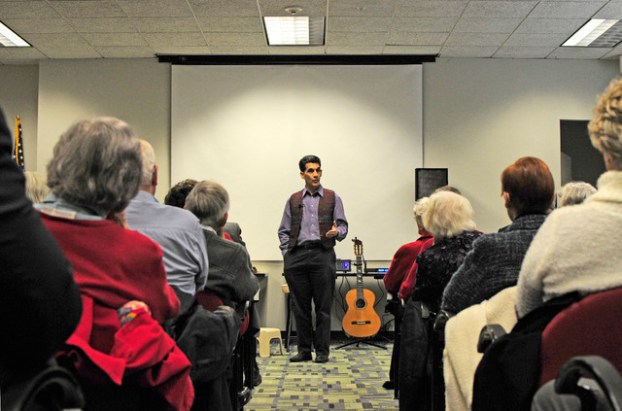 Gearing up for storytelling

Barry Stewart Mann talks to an estimated 100 attendees gathered Sunday inside LaGrange Memorial Library on Alford Street for A Taste of Storytelling. The annual event leads into Azalea Storytelling Festival, set for March 4 to 6 this year and celebrating 20 years.

http://lagrangenews.com/wp-content/uploads/sites/37/2016/02/web1_web0215TasteOfStorytelling.jpgBarry Stewart Mann talks to an estimated 100 attendees gathered Sunday inside LaGrange Memorial Library on Alford Street for A Taste of Storytelling. The annual event leads into Azalea Storytelling Festival, set for March 4 to 6 this year and celebrating 20 years.

LaGRANGE — The idea for what became the Azalea Storytelling Festival hatched in the mid 90s when Evelyn Jordan, LaGrange College education professor, and Pat Gay, Troup-Harris Regional Library youth services director, attended a storytelling festival in Albany, where Donald Davis, one of the country’s top storytelling talents, was a featured teller.

At the end of that festival, Jordan and Gay asked Davis, “Can we have something like this in LaGrange?”

When they returned to LaGrange, Jordan and Gay contacted Joyce Morgan, then a Troup County schools associate superintendent. They brought Morgan into the planning, adding the college, library and public schools as cornerstones of the Azalea Storytelling Festival.

In the 20 years since, the festival has been recognized in many ways, and has received the Troup County Tourism Visionary Award, as well as the National Storytelling Leadership Award.

This year, in celebration of two decades of “The Azalea,” Davis and Stivender will return to Callaway Auditorium to entertain the crowd with their tales. Wyndham passed away in 2011.

Two other major storytellers, Michael Reno Harrell and Barbara McBride Smith, both of whom may be familiar to regular Azalea attendees, are slated to perform. LaGrange’s own lauded storyteller, Carol Cain, will emcee.

Countless factors have contributed to the growth and longevity of the festival, but according to Stivender, who has been a featured teller at several Azalea festivals, the most important part of its success is the people who give their time and heart to the planning of the event every year. He doesn’t even consider coming to LaGrange to perform to be work — it is more of a visit with dear friends, he said.

Another large part of the festival’s success is the venue, Stivender said. He remembered the concrete floors and gym-like atmosphere of the old Callaway Auditorium, and he praised the efforts of LaGrange College to refurbish the space.

He said it is now one of the premier performance venues in the country, with comfortable seating and wonderful acoustics. Many festivals feature tents, with storytellers performing in each one, and festival goers move from tent to tent in order to listen. The Azalea’s comfortable venue allows the audience to relax, and have the storytellers come to them, he said.

The Azalea Storytelling Festival has always taken place during the first full weekend of March. That tradition still holds, but over time it has added several opportunities for the public to experience storytelling during the rest of the year.

Stories With Friends is a casual gathering that is planned for several Sunday afternoons in the fall and winter months at the Lafayette Society for Performing Arts, which oversees the Azalea festival. Members of the Azalea storytelling committee tell stories, and the public is invited to try their hands at telling stories.

The event is an annual co-effort of the Azalea Storytelling Committee and Friends of the LaGrange Memorial Library, taking place each February at Troup-Harris Regional Library. It offers a “taste” of what storytelling is about, with several stories by local tellers.

October is the time for Stories in the Gardens, which is sponsored by and takes place at Hills & Dales, the historic estate of the Callaway family. Regional tellers perform in the old pecan grove on the lovely property, and light snacks are provided.

In 2016, the featured storyteller will be performer and LaGrange native Fred Newman, known for his role on “A Prairie Home Companion.”

The 2016 Azalea Storytelling Festival is set for March 4–6 at the Callaway Auditorium, 801 Dallas St., on the LaGrange College campus. Additional information, a full schedule of events and ticket purchases are available at www.lsparts.org.

Tickets also may be purchased in the LSPA business office Monday to Thursday from 1–4 p.m. or on site at the event. Organizers recommend advance ticket purchases to avoid lines the day of the event.

By Melanie Ruberti mruberti@civitasmedia.com Lisa Benefield said this was all that was left of her son Levi Hart’s car after... read more