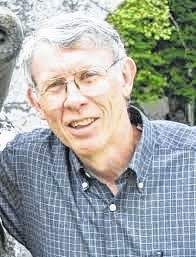 He has been active more than four decades and written 30 science fiction and fantasy books.

Bishop left teaching in 1974 to become a full-time writer. In those early years of freelance writing, he would occasionally work as a substitute teacher in the public schools and as a stringer for the Ledger-Enquirer in Columbus.

In 1996, Bishop became writer-in-residence at LaGrange College located near his home in Pine Mountain. Bishop taught creative-writing courses and an occasional January interim-term course. He held this position until spring 2012.

Science fiction “seems the best medium in which to say whatever I want to say at that moment,” Bishop said. “… Sometimes a story casts itself as science fiction because I have been deliberately thinking in (science fiction) tropes — aliens, other worlds, time travel, alternative histories — and it’s impossible to proceed to strong effect without deploying or evoking these tropes.”

Bishop has twice been awarded the Nebula Award: in 1981 for “The Quickening” as best novelette, and in 1982 for “No Enemy But Time” as best novel. He also received four Locus awards and his work has been nominated for several Hugo awards.

In July 2009, his story “The Pile” received the Shirley Jackson Award for Best Short Story of 2008. In 1993, 20th Century Fox optioned his novel “Brittle Innings” for a film and bought the rights outright in 1995.

Bishop has published 13 solo novels, three collaborative novels and more than 140 pieces of short fiction, most of which have been gathered into eight collections. His latest collection, “The Door Gunner and Other Perilous Flights of Fancy,” a career retrospective, was published in February 2012 by Subterranean Press.

His latest anthology, “Passing for Human,” was co-edited with Steven Utley and published by PS Publishing in 2009.

Bishop is married to Jeri Ellis Whitaker. They had a son, Jamie, and a daughter, Stephanie Bishop Loftin, who is now a student at Columbia Presbyterian Seminary in Decatur. Jamie, a graphic artist who designed the covers of several of his father’s books, was an instructor of German and Information Technology at Virginia Tech and one of the victims of the mass shooting there on April 16, 2007.

The Author Talk series is free and open to the public.

A mother’s mission: Seeking awareness after sons’ wrecks from…