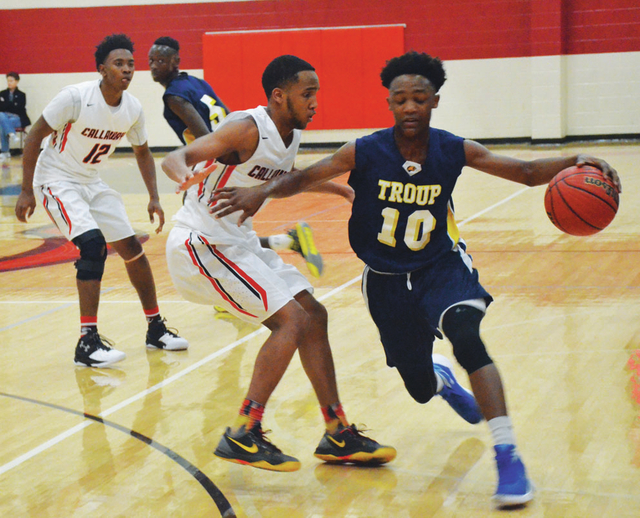 Ernest Patillo, who led the Callaway Cavaliers in scoring, gets a shot away during Saturday’s game against Rockmart. Kevin Eckleberry | Daily News

http://lagrangenews.com/wp-content/uploads/sites/37/2016/02/web1_CHS13.jpgErnest Patillo, who led the Callaway Cavaliers in scoring, gets a shot away during Saturday’s game against Rockmart. Kevin Eckleberry | Daily News

CARROLLTON – They’ve been here a time or two, or three, or four.

With Saturday’s 61-41 victory over the Rockmart Yellow Jackets, the Callaway Cavaliers have now won four consecutive region-tournament championships, a remarkable accomplishment for the program under the direction of head coach Terry Hayes.

Not surprisingly, considering how the Cavaliers dominated the region this season, there wasn’t a whole lot of suspense in Saturday’s game that was played at Central-Carroll.

Rockmart did a nice job of staying within striking distance for much of the game, but the outcome was never really in doubt after Callaway surged to a 19-10 lead after the first quarter.

In the regular season and the tournament, the Cavaliers went 12-0 against their Region 5-AAA opponents, and only one of those games was decided by single digits.

The Cavaliers (18-3 overall) will carry a 12-game winning streak into Wednesday’s home game against Jefferson in the opening round of the state tournament.

For the seniors on the team, including four-year starter Dre Martin, winning region titles is all they’ve ever known.

Callaway began its run of region titles by beating Douglass 74-64 in 2013, and it beat Jackson 82-67 in 2014 before making a run to the final four of the state tournament.

A year ago, Callaway outlasted Rockmart 69-63 in the region-title game before advancing to the quarterfinals at state.

Now, with Saturday’s victory, the seniors have four region championships to their credit, and they’re ready for one final state-tournament run.

��It feels good,” senior Ernest Patillo said. “I’m proud to be a Callaway Cavalier, and I’m proud for coach Hayes. With all the hard work he goes through, we should be ready.”

Martin, who also has three region titles to his credit in football, said going out as a senior with another region championship “means a lot.”

“We’ve accomplished a lot, and there’s still a lot more to accomplish,” Martin said. “But it feels great to see what all we’ve done.”

Junior Braylon Sanders, a starter for the past three seasons, said “we’ve just put in the hard work over the years, and we do what we’ve got to do to win another region.”

The Cavaliers were holding a one-point lead in the first quarter when they went on a 10-2 run to go up by nine.

After the Yellow Jackets got within six, Sanders drained a 3-pointer at the first-quarter buzzer to put the Cavaliers back on top by nine.

The Cavaliers led by as many as 13 points early in the second quarter, but the Yellow Jackets hung tough, and at the half they were trailing 32-22.

In the third quarter, the Cavaliers led by as many as 15 points, and they were ahead 46-32 as the final period got under way.

The Yellow Jackets got as close as 10 with more than four minutes to play on an Avery Allen 3-pointer, but they only scored three points the rest of the way.

Callaway finished the game on a 13-3 run.

“Rockmart played smart,” Hayes said. “You know how it is when you play a team three times. It’s hard to beat them three times.”

Callaway’s state opener, which will be Wednesday at 6 p.m., is against a Jefferson team that finished fourth in Region 8-AAA.

If the Cavaliers get past that game, they’d be at home again on Saturday against either South Atlanta or Johnson.