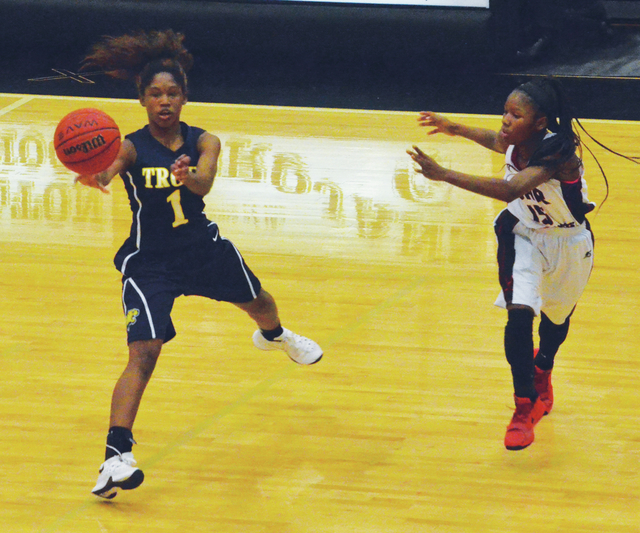 Gabby Lockhart, the only senior on the Troup basketball team, gets a shot away during a region-tournament game against Carrollton. Troup will visit North Oconee in the first round of the state tournament today. Kevin Eckleberry | Daily News

http://lagrangenews.com/wp-content/uploads/sites/37/2016/02/web1_troup1-5.jpgGabby Lockhart, the only senior on the Troup basketball team, gets a shot away during a region-tournament game against Carrollton. Troup will visit North Oconee in the first round of the state tournament today. Kevin Eckleberry | Daily News

After a three-year absence from the state basketball tournament, the Troup Lady Tigers have returned to the big stage this season.

The Lady Tigers, who finished fourth in the Region 5-AAAA tournament, will be on the road today to take on Region 8-AAAA champion North Oconee in the first round of the state tournament.

It will be Troup’s first state-tournament game since it lost to Columbia in the quarterfinals of the 2012 state tournament.

Can the Lady Tigers make a similar run this year?

Head coach Carla Thornton, who was at the helm for that team in 2012 that won a region title and captured two wins at state, believes her team is capable of going on the road and getting a win today.

In the region tournament, Troup beat Fayette County to reach the semifinals where it lost to Carrollton.

Thornton felt her team’s inability to turn legitimate scoring chances into points was the difference in the Carrollton game.

“We could have easily been playing for the championship,” Thornton said. “We got great looks. We just didn’t finish. If we want to continue this season on a little bit further, we’ll have to finish tomorrow. I think we can get to the basket on them, watching them on film.”

This will be the first time any of the current Troup players have participated in the state tournament.

The Lady Tigers do have some big-game experience, though.

The Lady Tigers rallied from a seven-point deficit in the fourth quarter to win 48-40 and qualify for state.

Thornton said a big challenge this season has been getting the players to believe they have the ability to “play with anyone.”

“Sometimes, I feel like they feel like the moment’s too big for us,” Thornton said. “They’re kind of nervous, or scared. I told them, let’s use this as a building block. You’re one of 32 teams left. That’s the big thing, finding that mindset, finding that confidence that we can play with anyone.”

When things go well for the Lady Tigers, they’re usually getting offensive contributions from a handful of different players.

Kwyneshia Spence is Troup’s leading scorer and is a consistent threat to put up big numbers, and Shaqoya Gilbert, Akhya Mitchell and Kiya Fulton can also score in double figures.

Jedda Madden provides a tough inside presence, and her 15 rebounds were critical in the win over Fayette County.

Troup’s only senior is Gabby Lockhart, and while she usually isn’t one of the leading scorers, Thornton said she brings a lot to the team.

“I love hustle players,” Thornton said. “I’ll reward somebody that hustles. That’s the kind of coach I am. She does that for us.”

Thornton said today’s game is a great opportunity for all of the players to gain some exposure.

“Go out and make a name for yourself, because you never know who’ll be watching,” Thornton said. “You may only get one chance to impress a scout or somebody who may be in the stands.”