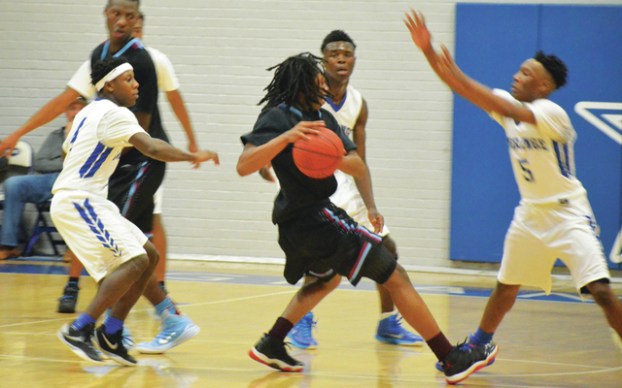 The Callaway Cavaliers will be at home today for the first round of the Class AAA state tournament. Kevin Eckleberry | Daily News

http://lagrangenews.com/wp-content/uploads/sites/37/2016/02/web1_CHS15.jpgThe Callaway Cavaliers will be at home today for the first round of the Class AAA state tournament. Kevin Eckleberry | Daily News

LAGRANGE – The LaGrange Grangers and Callaway Cavaliers are nearly perfect at home this season.

The two teams have combined for just two losses on their home floors, and they’ll try to continue that trend today as the state basketball tournament gets under way.

LaGrange, fresh off a stirring win over Shaw in the Region 1-AAAAA championship game, will host Drew today, with tip-off set for 7:30 p.m.

Callaway, which dominated Rockmart to win the Region 5-AAA title, will take on Jefferson, with the game set to begin at 6 p.m.

If Callaway and LaGrange both win, they’ll be back at home on Saturday for a second-round game.

LaGrange earned a number one seed for the state tournament by rallying to beat Shaw 56-55 at home on Saturday.

The Grangers trailed by as many as 10 points in the fourth quarter before staging a comeback, with Derieko Smith scoring the go-ahead basket with less than 10 seconds to play.

The Grangers (22-5) have won seven of their past eight games, and two of those wins were against Northside and Shaw in the region tournament.

This is the second straight season LaGrange heads into the state tournament after winning a region title.

A year ago, LaGrange made it to the state quarterfinals before losing to Allatoona, the eventual state runner-up.

If LaGrange wins today, it would host either Heritage or South Paulding on Saturday.

For Callaway, being a number one seed is nothing new.

The Cavaliers have won four consecutive region championships, and they’re looking to make an extended state run for the third straight year.

Callaway made it to the state semifinals in 2014, and it reached the quarterfinals a year ago.

Callaway’s state opener this season is against a Jefferson team that has a losing record but managed to make it to state by beating Elbert County 46-43 in the region tournament.

After losing its next two games, Jefferson (9-17) ended up as its region’s fourth seed.

If the Cavaliers get by Jefferson, the task would be a much more difficult one in the second round against either South Atlanta or Johnson-Savannah.

South Atlanta (22-6) has put together a strong season that included a win over LaGrange, and Johnson (20-7) finished tied for the first in a powerful Region 1-AAA during the regular season.

After the first two rounds are completed, the state tournament moves to neutral sites.

LaGrange would be in Columbus for the third and fourth rounds, while Callaway would be in Augusta.

The championship games will be played in Macon.

OF NOTE: For Callaway’s state-tournament game today, it’ll be a “white-out”, so fans are encouraged to wear white shirts to the game. The game begins at 6 p.m.

By Kevin Eckleberry keckleberry@civitasmedia.com Gabby Lockhart, the only senior on the Troup basketball team, gets a shot away during a... read more