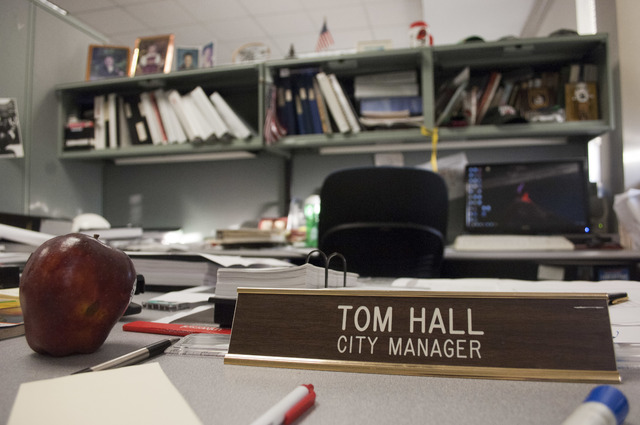 City employees mourn the death of Tom Hall, who was LaGrange city manager from 1994 until his death late Tuesday evening.

http://lagrangenews.com/wp-content/uploads/sites/37/2016/02/web1_CityManager02WEB.jpgCity employees mourn the death of Tom Hall, who was LaGrange city manager from 1994 until his death late Tuesday evening.

LaGRANGE — An American flag outside City Hall flew at half staff this morning in remembrance of Tom Hall, city manager since 1994, who died unexpectedly late Tuesday evening. He was 54.

His death appeared to be of natural causes and an autopsy is pending, Cook said. Hall was on medical leave from his job for the past few weeks following a fall in his home in which he was injured.

In his absence, Meg Kelsey, deputy city manager, was named acting city manager at a City Council session earlier this month. She will continue to assume his duties.

During his tenure as LaGrange’s chief administrator, Hall oversaw a period of diverse growth and change in the city. He supervised the city’s revenue shift from relying on property taxes to utilities under Mayor Jeff Lukken and established the city’s municipal court and probation program. He was integral in more recent initiatives, including the Sweetland Amphitheater at Boyd Park, curbside recycling and the recapture and sale of methane gas from the city’s landfill.

Mayor Jim Thornton this morning remembered Hall as a visionary leader who will be difficult to replace.

“Tom Hall was a wonderful human being and a tireless worker on behalf of the citizens of LaGrange,” Thornton said. “Anyone who had the chance to work with Tom knew how very good he was at his job and how incredibly passionate he was about the city. His reputation was one of the best in the business and he was well known throughout Georgia and beyond.”

Mourning his death and fighting back tears at City Hall this morning, Sue Olson, Hall’s secretary, said he was a talented leader who fought for fairness and listened vigilantly to the concerns of all residents.

“There won’t be another one like him,” she said. “He was a strong, strong man — one of the most fair people I’ve ever known. Tom’s door was always open, whether you were a CEO or a garbage collector.”

Hall leaves behind a vacuum and many unfinished projects, including a downtown hotel project and a tax allocation district at the LaGrange Mall. Thornton said those projects will continue as planned under the direction of city staff.

“Over the years, Tom assembled a great staff with department heads that know their areas and are great at their work,” Thornton said. “There will be an adjustment period, but I’m confident that the city staff, under the direction of acting city manager Meg Kelsey, will be able to see those projects to fruition.”

In a statement today, Dekmar said Hall’s leadership “was the gold standard by which we measured ourselves as city employees and department heads.”

Other city employees, including the acting city manager, Kelsey, offered their condolences and prayers to Hall’s family.

“I hold a deep admiration for him as a person and a mentor,” Kelsey said. “There will be a void left at the city that can never be truly replaced.”

Hall is survived by his wife, Gina, and their two children, Dylan and Cassidy. Funeral arrangements are pending and will be announced later this week.

Woman calls for answers on explosions