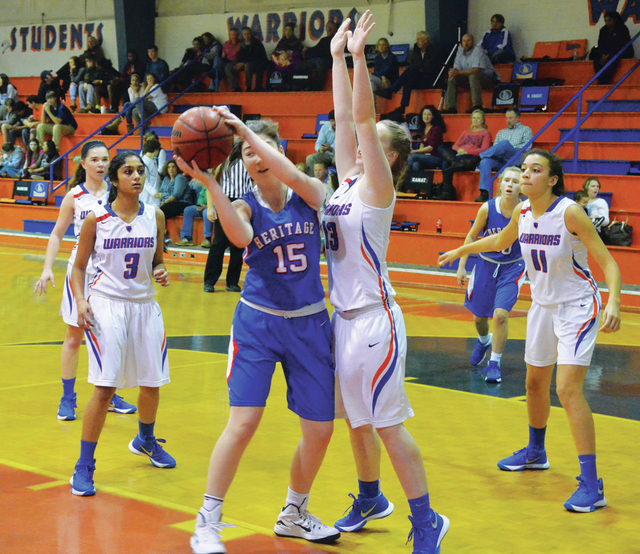 LaGrange Academy’s Felicity Liechty gets a pass away during Tuesday’s region-tournament win. The victory secured a spot in the state tournament. Kevin Eckleberry | Daily News

http://lagrangenews.com/wp-content/uploads/sites/37/2016/02/web1_LGA15.jpgLaGrange Academy’s Felicity Liechty gets a pass away during Tuesday’s region-tournament win. The victory secured a spot in the state tournament. Kevin Eckleberry | Daily News

LAGRANGE – It’s all coming together at the right time.

For the LaGrange Academy Lady Warriors, it has been a struggle for much of the season, and that’s not too surprising considering all five starters from last year’s team that won a region championship graduated.

As the season has hit the home stretch, though, the Lady Warriors have figured some things out.

After winning two of its final three games to end the regular season, LaGrange Academy overwhelmed Solid Rock Academy 41-23 on Tuesday in the opening round of the GISA Region 1-AA tournament.

The win not only put the Lady Warriors in the semifinals of the region tournament, but it guaranteed them a spot in the state tournament that begins next week.

Things started to turn for LaGrange Academy when it beat Solid Rock by one point in overtime late in the regular season, and it followed that up with a victory over Griffin Christian.

With those two wins, the Lady Warriors had their first winning streak of the season.

After a road loss to Bethlehem Christian to end the regular season, LaGrange Academy returned to its winning ways with Tuesday’s blowout win over Solid Rock.

“The win against them in overtime, you could see it as a turning point,” LaGrange Academy coach Mike Petite said. “And then we followed that up with a win against Griffin to get back-to-back wins for the first time this season.”

Petite said the work ethic of the players has made the difference.

In Tuesday’s game, the Lady Warriors surged to a 15-6 lead after the first period, and they were ahead 27-11 at the half.

LaGrange Academy maintained a comfortable margin throughout the second half.

“That first quarter, we pretty much did everything we wanted to do,” Petite said. “From an offensive standpoint, we executed in every facet. From a defensive standpoint, we owned the boards, and didn’t give up any quality attempts. You can’t ask for more than that. And we followed that up with a good second quarter. We scored 15 and 12 in two quarters. There are games where we didn’t score that many.”

Leah Major, who has come on strong late in the season, led the Lady Warriors with 22 points, and she was 4-of-8 on 3-point attempts.

Major also had three assists, seven rebounds and a pair of steals.

Felicity Liechty added 10 points on 5-of-10 shooting, and she pulled down 11 rebounds and had three steals.

Laney Anderson added seven points and made her only 3-point attempt, and Ashlee Mains was strong inside with 15 rebounds and a pair of blocked shots.

Next up, LaGrange Academy will host top-seeded Flint River Academy at 7 p.m. on Thursday in the semifinals.

It’ll be a tough matchup against a Flint River team that has dominated the region.

“We’ll have our hands full,” Petite said. “We’ll give it everything. But we’ve already accomplished our goal. We qualified for the state playoffs. Since Oct. 19, our first day of practice, the only thing we talked about is February is what matters, and let’s play our best in February. Let’s qualify for state, and let the rest of it rip.”