Cavaliers take step toward a championship 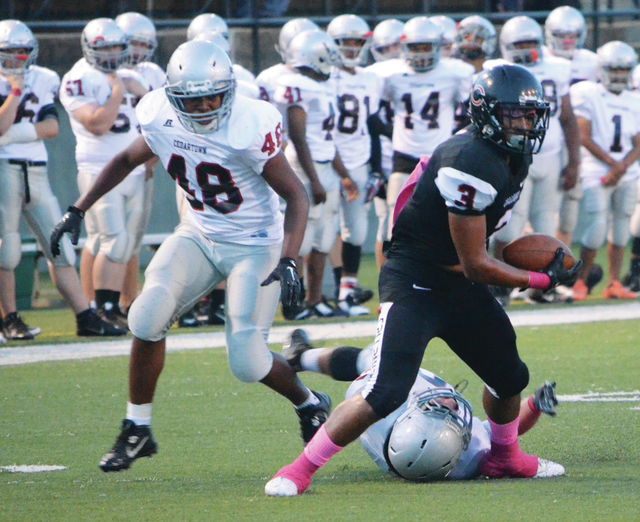 Callaway’s Quantrez Cooper handles the ball during the first half of Wednesday’s state-tournament victory over Jefferson. Callaway will host South Atlanta in the second round on Saturday. Kevin Eckleberry | Daily News

http://lagrangenews.com/wp-content/uploads/sites/37/2016/02/web1_CHS1-3.jpgCallaway’s Quantrez Cooper handles the ball during the first half of Wednesday’s state-tournament victory over Jefferson. Callaway will host South Atlanta in the second round on Saturday. Kevin Eckleberry | Daily News

The red-hot Callaway Cavaliers handled the visiting Jefferson Dragons 73-58 on Wednesday in the first round of the Class AAA state tournament.

The Cavaliers (19-3), who have won 14 straight games, will be back home on Saturday to play South Atlanta in a second-round game.

The Cavaliers came into the state tournament needing five wins to capture a championship, and now that number is down to four.

“As long as we win the game and make it to the second round, that’s what matters,” said Braylon Sanders, a junior standout for the Cavaliers. “We’ll just have to go ahead and get better, day by day, and be ready Saturday.”

The Cavaliers got off to a quick start in Wednesday’s game, surging to a 13-2 lead, and they were ahead 24-8 at the close of the first quarter.

Jefferson hung tough from there and stayed within shouting distance for much of the game, but the night belonged to Callaway.

“We maintained the lead,” Callaway head coach Terry Hayes said. “They’re a disciplined team, and they get good shots, and we missed some easy shots. And defensive-wise, they got inside the paint, which hurt us.”

Hayes wasn’t about to complain about winning a state game, though.

“The big thing is, just move on to the next round,” Hayes said.

Ernest Patillo, who had eight points in the first quarter, and Dre Martin each finished with 19 points for the Cavaliers.

Joe Brown added 12 points, and Sanders chipped in with 11 points.

Hunter Thompson made three 3-pointers and scored 23 points for Jefferson.

Early on, it looked like Callaway was going to blow Jefferson out of the gym.

Martin hit a 3-pointer 30 seconds into the game to give the Cavaliers the lead, and that was the start of a 13-2 run to begin the game, and the home team was ahead by 16 by the time the first quarter ended.

The lead grew to 18 in the second quarter, but Jefferson fought back, and by the half Callaway’s lead was down to 36-23.

The Dragons got within 11 points in the third period, but when Patillo scored after pulling down an offensive rebound, the Cavaliers were once again ahead by 18 with 1:40 left in the quarter.

The resilient Dragons closed the quarter on a 5-1 run, though, and the Cavaliers held a 52-38 as the final period got under way.

Twice in the fourth quarter the Dragons got within nine, but they came no closer.

After the Dragons got within nine for the final time, the Cavaliers went on a 16-2 run to finally put it away.

Martin scored eight points in the final quarter and was 4-of-4 from the free-throw line, and Brown had five points in the fourth period and had a 3-point play to push the lead to 70-47.

Callaway’s next challenge is a big one.

South Atlanta (23-6), the number three seed from Region 4-AAA, got a 63-57 road win over Johnson in Wednesday’s state opener.

South Atlanta was the region’s top team during the regular season, but it was upset in the semifinals of the region tournament before winning the third-place game.

“We’ve got to play a lot better in the next round, if we even want to think about advancing,” Hayes said. “We’ve got a tough opponent.”

Sanders said the Cavaliers will need to tighten some things up.

“We have to box out and rebound, and play better defense,” Sanders said. “And hit more shots. Our shot was off tonight.”

Warriors are heading back to state