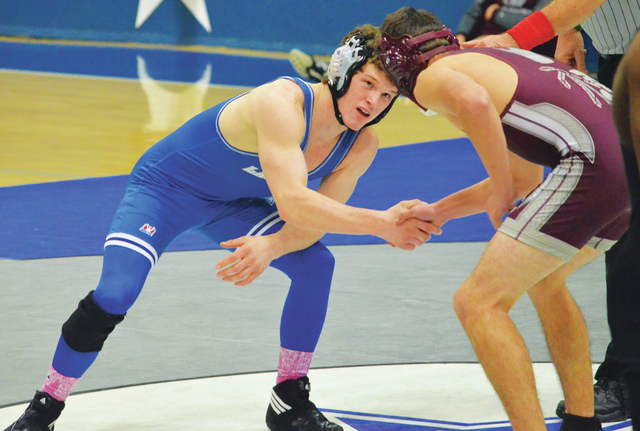 LaGrange’s LaPerion Perry splits Drew’s defense during the second half of Wednesday’s state-tournament game. LaGrange won 81-60 to advance to the second round. Kevin Eckleberry | Daily News

http://lagrangenews.com/wp-content/uploads/sites/37/2016/02/web1_LHS8-1.jpgLaGrange’s LaPerion Perry splits Drew’s defense during the second half of Wednesday’s state-tournament game. LaGrange won 81-60 to advance to the second round. Kevin Eckleberry | Daily News

LaGrange’s Gabe Duckett gets to the basket during Wednesday’s state-tournament win. Duckett was one of 10 LaGrange players who scored. Kevin Eckleberry | Daily News

http://lagrangenews.com/wp-content/uploads/sites/37/2016/02/web1_LHS9-1.jpgLaGrange’s Gabe Duckett gets to the basket during Wednesday’s state-tournament win. Duckett was one of 10 LaGrange players who scored. Kevin Eckleberry | Daily News

LaGrange’s Jerious Freeman keeps the ball away from a Drew player during the second half of Wednesday’s game. Kevin Eckleberry | Daily News

http://lagrangenews.com/wp-content/uploads/sites/37/2016/02/web1_LHS6-1.jpgLaGrange’s Jerious Freeman keeps the ball away from a Drew player during the second half of Wednesday’s game. Kevin Eckleberry | Daily News

For most of two weeks, the Grangers haven’t had a chance to relax, since everyone of their games has come down to the wire.

In a brilliant all-around display, the Grangers (23-5) soared to a 45-18 halftime lead, and they eased to an 81-60 victory to keep their state-championship hopes alive.

LaGrange is one of 16 Class AAAAA teams still standing, and it will host South Paulding on Saturday in a second-round game.

If the Grangers win, they’ll advance to the elite eight for the second straight year.

In Wednesday’s game, Drew had no chance.

The Grangers started out hot from the field, making three quick 3-pointers, and they never let up on either end of the floor.

While the Grangers have been winning games of late, they have struggled a bit with their shooting, but that wasn’t the case against Drew.

“Our basketball team has been due to get a hot start from the perimeter,” LaGrange head coach Mark Veal said. “We hit the first three threes, and we’re up 9-0, and they had to switch defenses, and that can be to our advantage. And we did some different things defensively that probably helped us.”

Senior guard Qua Epps, one of 10 LaGrange players who scored in the game, said “we knew we had to come out and push the tempo.”

The Grangers did just that, and they ended up taking a 25-9 lead after the first quarter.

LaPerion Perry, Derieko Smith and Mike Hardy each connected on 3-pointers in the first quarter, and those three players combined for 18 points in the first eight minutes.

As the second quarter began, LaGrange had no intention of letting Drew back into the game.

“We can’t take our foot off the pedal,” Epps said. “We’ve got to keep playing.”

The Grangers kept pouring it on in the second quarter, scoring 20 more points, and they were ahead by 27 points at the break.

“We got a big lead, and you don’t want to let them believe that they can come back,” Veal said.

Any hope Drew had of making a comeback was extinguished in the third quarter.

When Gabe Duckett made a 3-pointer, the Grangers had a 30-point lead, and Alex Dantzler’s shot from long range pushed the lead to 36.

By the time the third period came to a close, Lagrange led 69-38.

The fourth quarter was limited to six minutes because of the mercy rule, and Veal was able to make sure everyone on the team got some playing time.

Perry led the Grangers with 17 points, and Smith added 16 points and was 7-of-10 from the free-throw line.

Dantzler made three of LaGrange’s seven 3-pointers and scored 13 points, and Epps and Duckett each had eight points, with Duckett making two 3-pointers.

All of LaGrange’s offensive weapons were on display in the game.

“Everybody is a threat on our team,” Epps said. “Everybody can play.”

Dantzler, one of the many players who has provided a major contribution off the bench this season, said it’s nice to know the team doesn’t have to depend on one or two players to carry the whole offensive load.

“It feels good. We don’t have to rely on one person too much,” Dantzler said. “We’ve got other teammates who can do it, too.”

LaGrange’s next challenge is a big one.

South Paulding’s only loss during that stretch came in the Region 5-AAAAA-championship game when it fell to unbeaten Allatoona.

In Wednesday’s game, South Paulding outscored Heritage 26-19 in the fourth quarter to keep its season alive.

If LaGrange wins on Saturday, it would play a quarterfinal game next week in Columbus.

Last year, LaGrange made it to the quarterfinal round before falling to Allatoona, the eventual state runner-up.

Warriors are heading back to state