With acquisitions, WellStar would be largest health system in state 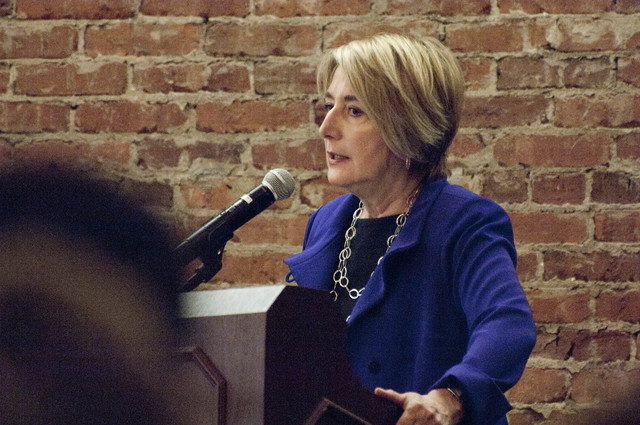 Candice Saunders, CEO of WellStar Health System, speaks to the LaGrange-Troup County Chamber of Commerce on Tuesday during a monthly breakfast meeting.

http://lagrangenews.com/wp-content/uploads/sites/37/2016/02/web1_SaundersWEB.jpgCandice Saunders, CEO of WellStar Health System, speaks to the LaGrange-Troup County Chamber of Commerce on Tuesday during a monthly breakfast meeting.

LaGRANGE — There is no question that the medical landscape has changed in the wake of President Barack Obama’s signature health care law, the Affordable Care Act, commonly called Obamacare.

As hospitals and care providers across the country cope with new requirements, payment mechanisms and changing regulation, that landscape is shrinking.

If West Georgia Health merges with Marietta-based WellStar Health System next month as expected, it would make WellStar the largest health care system in Georgia, with 11 hospitals under its belt and a service area that encompasses the greater northern part of the largest state east of the Mississippi River.

During a breakfast meeting with the LaGrange-Troup County Chamber of Commerce on Tuesday, WellStar’s CEO, Candice Saunders, addressed that topic.

“There is increasing consolidation around the country, including with insurers,” she said. “We’ve been watching that very closely.”

Behind the trend is a move to create “economies of scale,” Saunders said. Health care is expensive and having a network of providers, specialists and hospitals is necessary to provide low-cost, affordable care, she said.

“The goal is sustainability,” Saunders added.

West Georgia Health isn’t the only system WellStar has its eyes on.

Under a definitive agreement signed in December, WellStar is poised to purchase Dallas, Texas-based Tenet Healthcare and its five metro-Atlanta hospitals.

As a result of these changes, WellStar would employ about 20,000 people across their 11 hospital campuses, more than 200 medical office locations and numerous outpatient facilities. The purchase of the Tenet facilities will be submitted to the Federal Trade Commission for review, according to a press release from WellStar.

Similarly, the WGH and WellStar partnership requires the approval of the Georgia attorney general following a public hearing process held last month. That approval is expected by the end of this week or early next week.

Within the next few years, there could be as few as five major health care providers in North Georgia, Saunders said Tuesday.

Although WellStar will be the biggest, that isn’t their overall goal, according to Tyler Pearson, a spokesman for WellStar.

“It’s not about getting bigger,” he wrote in an email to the Daily News. “It’s about how we will be able to improve the quality of care we offer and increase patient access. Together, we will be better prepared to address challenges in the health care industry.”