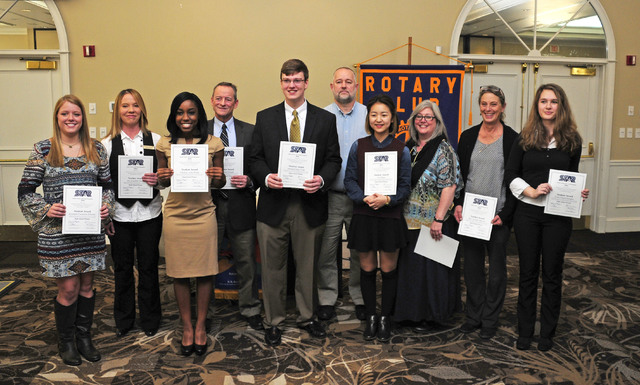 LaGRANGE — The LaGrange Rotary Club on Wednesday highlighted five high school students in Troup County whose schools have designated them STAR students, who in turn designated their STAR teacher.

Here are the other STAR students and teachers for each school highlighted Wednesday and summaries of the speeches they gave to a packed room of Rotary Club members at Highland Country Club (organized alphabetically by students’ last names):

Coral Douglas was home-schooled since first grade, until she attended the academy about a year ago. She was at first anxious and overwhelmed by the difference in her setting and new peers — until she met her STAR teacher, Jennifer Johnson.

“Seventh period, my first day was with Mrs. Johnson — immediately I felt welcome … and I just knew good things were going to happen,” Douglas said.

Johnson helped boost her confidence and eventually became “like an adopted part of my family.”

She looks up to the “compassionate music aficionado” who connects with all types of music, the area Douglas hope to be in. Douglas has been writing music since a young age, but never had a music teacher.

“I never had anyone I could talk to about very specific drum patterns or my favorite guitar riffs before, to actually have someone behind me to actually explain the theory behind why it sounded that way,” she said. “… She had the answer to everything.”

Douglas said she appreciated everything Johnson has done for her and everyone at LaGrange Academy.

College: Will attend in Korea to study computational media

Despite math not being her favorite subject, Callaway High School senior Ye-Ji Kim chose math teacher Melissa Stanley as her STAR teacher. Kim was never intrigued by the subject until she had Stanley as a teacher, she told the crowd gathered at Wednesday’s LaGrange Rotary Club meeting.

Despite Kim’s fear when she moved into an advanced placement class, Stanley guided her and other students through the “highly advanced, profound world of math.” She said the class has been intellectually challenging, with Kim creating a pile of crumpled pieces of paper next to her desk as she tried to work out complex concepts, but Stanley worked with her and helped her understand how to solve the problems.

“I sincerely thank my STAR teacher for letting me experience the desire to pull the best out of myself and to explore the latent potential inside of me,” Kim said.

She said Stanley brightens the classroom with her personality while pushing her students to their limits. Her guidance also helped grow Kim’s confidence and influenced her attitude toward success.

“Coach Quiggle has shown me the true meaning of the word knowledge,” Prince said. “He also served our nation for 30 years in the U.S. Navy, serving around the world, protecting our freedom.”

An AP U.S. history and economics teacher, Quiggle has challenged her academically, she said, but also influenced her in other ways.

“Coach has always encouraged me to optimize my potential, not only as a student, but also as an accomplished young woman,” she said.

Quiggle “continually utilizes his knowledge for the advancement of youth in class,” Prince added. He has taught her and all his students to use knowledge and to change lives by sharing that knowledge with youth.

Concluding her speech, she asked the crowd to applaud Quiggle for impact he has on all his students’ lives over the years. The attendees complied.

Troup High School senior “Libby” Wheeler discovered her passion after a life-changing experience, and with the support of her STAR teacher, “Niki” Watts, and others, is on track to reach her goal.

Wheeler wants to study pre-law because she has always wanted to help people, she told the Rotary audience. Initially, she wanted to be a doctor, but found out she was “a bit too squeamish to handle that.” After volunteering at Harmony House, a shelter for victims of domestic violence, she decided she wanted to advocate for domestic violence victims.

The victims Wheeler spoke with felt helpless and unsure how to support themselves because they can’t find representation to keep them safe, or assist them in getting their life back on track, she said. Domestic violence survivors who have an attorney have a 50 percent better chance of getting a restraining order against the accused abuser, she added.

Wheeler said she has worked hard in school and outside of class to make herself a viable candidate for colleges. She thanked her teachers for all their support.

“I’ve … been fortunate to have the support of numerous teachers, like Coach Watts … and these teachers have continually encouraged me and pushed me to think outside the box and deliver my very best every day. I appreciate each of them and know they are part of the reason I’m here to start the next stage of my journey.”

Rotary clubs in Georgia name a STAR student for each high school in their area. The LaGrange Rotary Club has been one of the longest-running, participating for 57 continuous years, noted Troup school system Superintendent Cole Pugh, thanking the club for its support.

“Created to focus public attention on Georgia’s outstanding students and teachers, the STAR student program showcases the academic achievement of students and one chosen educator who was instrumental in their development,” states a press release from the school system.

STAR student candidates must have the highest score in one sitting on the SAT in the November test date of their senior year. The student must be in the top 10 percent or one of the top 10 students in their class based on grade point average. STAR students name their STAR teacher.

For the Rotary presentation, students prepared responses from a list of given topics:

• “My most memorable educational experience.”

• “Ways I plan to use my gifts and talents to serve others.”

• “The STAR teacher I chose made a difference in my life.”