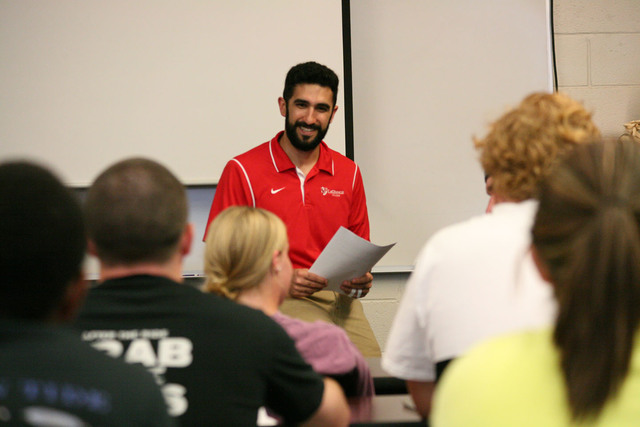 LaGRANGE — Arya Alami, who heads the growing Exercise Science and Physical Education Department at LaGrange College, never intended to be a professor.

A California native, he had an undergraduate degree in biological sciences from the University of California, Davis and expected to pursue a health-related career.

A lifelong interest in what he calls “the human body in motion” led him to graduate study in kinesiology at California Polytechnic State University, where he was asked to teach a lab section on biomechanics.

“I fell in love with teaching,” he said. And his life direction changed to academia.

“I want to teach and inspire,” he said. “I love the process of finding creative ways to share what I know.”

On Monday, Alami will “share what he knows” with a new audience as lecturer for the college’s 3D Journeys travel/lecture series on Cuba. Set for 10 a.m. in Turner Hall, the lecture focus will be “Cuba: Little Country, Big Sports.”

“For such a small country, Cuba produces a large number of really good athletes,” Alami explained.

His talk will look at the physical education system of the Communist society and how the Cuban government has put a focus on athletics in the educational system. There are, he suggests, two primary reasons for that.

“It’s a political move to stay relevant globally,” he said, “but also it gives the people something to be proud of.”

Alami joined the LC faculty in 2013, just weeks after completing his Ph.D. in sport psychology and motor behavior at the University of Tennessee, Knoxville. The Exercise Science Department was just one year old when he arrived, and he was excited to be part of its development from the ground up.

“It’s been amazing how fast it has grown,” Alami said — from about 20 majors the first semester to 40 at the end of the first year to about 115 now.

The growth reflects the high number of student athletes on campus, he said, and also the growth of the discipline.

“Students are starting to look at exercise science as a better route toward an allied health career,” he said. This includes students who want to be physical or occupational therapists, coaches, sport scientists, strength and conditioning professionals and athletic trainers.

Currently, Alami and his colleagues in the department are finalizing plans for a master’s program in strength and conditioning to begin this fall. In addition to their course work, the grad students will work with the college’s SPEED — sports performance enhancement education and development — Center which provides educational, service and research opportunities.

“It’s our jewel,” Alami said, “and it has two missions: to better prepare student athletes for competition and to expose Exercise Science students to working with college students,” thus giving them a leg up on work opportunities following graduation.

Alami, who hails from a small, college town in northern California, has quickly become involved in community life in LaGrange, working with the Chattahoochee Riverkeeper, the Hillside community and with several local recreational initiatives, as well as advocating for the new curbside recycling program begun by the city of LaGrange.

“Being asked to be involved in these activities is fulfilling a dream of mine,” he said. “It’s been very satisfying to find so many opportunities here.”

He looks at the 3D lecture series in much the same way. After speaking last fall at a “mini lecture” previewing the Cuba series, he found himself “energized” by the active involvement and interest in the eyes of the audience.

“It’s going to be a fun challenge,” he said.