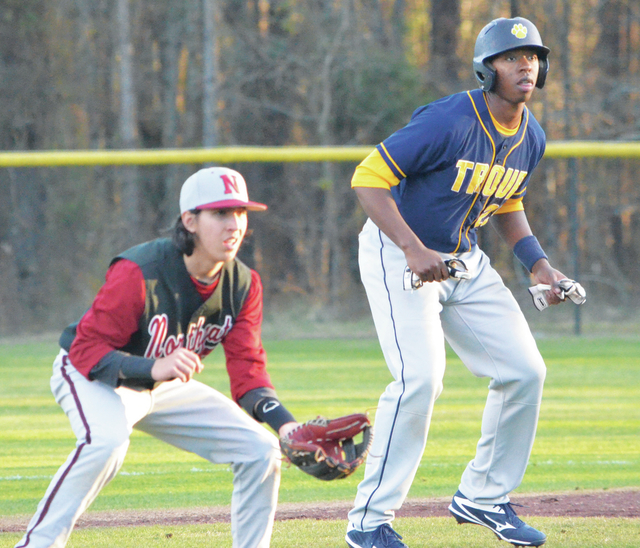 Troup’s Ryan Bliss makes is safely to third while coach Craig Garner gives him the slide sign during Thursday’s season-opening win over Northgate. Bliss had an RBI double in the first inning. Bliss had three hits, including two doubles. Kevin Eckleberry | Daily News

http://lagrangenews.com/wp-content/uploads/sites/37/2016/02/web1_troup4-2.jpgTroup’s Ryan Bliss makes is safely to third while coach Craig Garner gives him the slide sign during Thursday’s season-opening win over Northgate. Bliss had an RBI double in the first inning. Bliss had three hits, including two doubles. Kevin Eckleberry | Daily News

Winston Turner got the start for Troup and pitched into the fourth inning. Kevin Eckleberry | Daily News

http://lagrangenews.com/wp-content/uploads/sites/37/2016/02/web1_Troup1.jpgWinston Turner got the start for Troup and pitched into the fourth inning. Kevin Eckleberry | Daily News

Troup’s Miles Cameron gets a lead off second base during the first inning of Thursday’s game. Cameron had an RBI single. Kevin Eckleberry | Daily News

http://lagrangenews.com/wp-content/uploads/sites/37/2016/02/web1_troup6-1.jpgTroup’s Miles Cameron gets a lead off second base during the first inning of Thursday’s game. Cameron had an RBI single. Kevin Eckleberry | Daily News

LAGRANGE – They’re off and running.

The Troup Tigers jumped into a season filled with lofty expectations by beating visiting Northgate 7-4 on Thursday on their home field.

The Tigers scored all of their runs in the first three innings, and that was enough support for a trio of pitchers, including starting Winston Turner, who threw into the fourth inning to get the win.

The Tigers pounded out 12 hits, and catcher Brandon Gay had two of them, including a solo home run leading off the third inning.

Under head coach Craig Garner, the bunt is a big part of what the Tigers do, but they were swinging away in Thursday’s game.

“We laid back a little bit. We didn’t bunt any tonight,” Garner said. “I told them, don’t think for one second we’re going to get away from that. But I want to see what every one of them can do, and how they’re going to handle the bat.”

They handled it just fine, with eight of the nine members of the lineup reaching base at least once.

“We swung the bat,” Garner said. “Even some of our outs were hard, deep outs.”

One of the biggest swings of the night came with Gay leading off the third inning when he drove a 1-0 pitch over the left-field fence for the home run.

While Gay thought the ball was going to clear the fence, he sprinted out of the batter’s box in case it stayed in the park.

“I thought it might be (gone), but coach Garner tells us to be running no matter what,” Gay said.

It was an impressive debut for Gay, who is taking over at catcher for multi-year starter Jonathan Foster, who is now a member of the Auburn baseball team.

“I’m definitely looking forward to it,” said Gay, who also had a base hit and a walk in the game. “I had a good time today. Hopefully we’ll get better.”

Another one of Troup’s offensive stars on Thursday was sophomore shortstop Ryan Bliss, who had three hits, including two doubles, and a walk.

Also for Troup, Turner had a pair of hits, Jarred Helton and Ken Truitt both had doubles, Bo Halcomb had a hit and was on base three times with three runs scored, and Miles Cameron and Colby Bridwell each had a base hit.

On the mound, Turner started and pitched 3 2/3 innings before leaving the game.

“We had him on a pitch count,” Garner said. “Once he got right there, we ended up pulling him.”

Troup jumped out to a 2-0 lead in the bottom of the first.

Halcomb ignited the rally with a triple, and he scored on a double by Bliss, and Cameron came through with an RBI single later in the inning.

The Tigers added a single run in the second inning.

Halcomb reached on a one-out walk and later scored, and Bliss had a base hit in the inning.

The Tigers kept pouring it on with four runs in the third inning, with Gay getting things started with his solo home run.

Truitt and Bliss both had doubles in the inning, Bridwell had a base hit, and Halcomb was hit by a pitch and he eventually scored his third run of the game.

Northgate, which had a single run in the second inning, scored three runs in the fourth inning to get within three, but that rally was snuffed out by Helton after he entered the game in relief.

Over the final three innings, Northgate only had one base runner against Helton and Darda.

The Tigers will be back home on Tuesday to take on East Coweta, with first pitch set for 5:30 p.m.