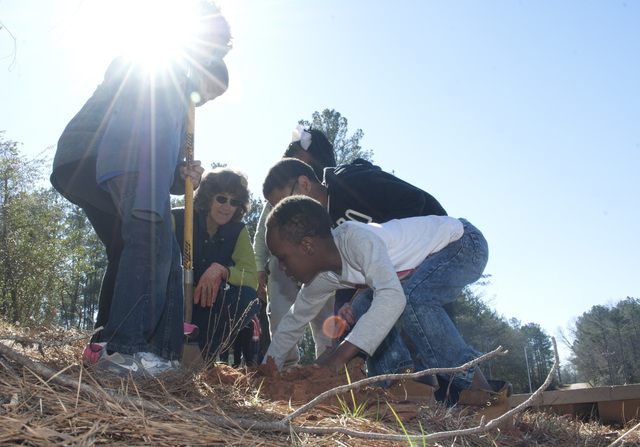 A.J. Brown, 8, a second grader, plants a dogwood tree at Ethel Kight Elementary School on Friday. The LaGrange Sierra Club and about 120 students planted dozens of trees at the school during an Arbor Day celebration.

http://lagrangenews.com/wp-content/uploads/sites/37/2016/02/web1_ArborDay01WEB.jpgA.J. Brown, 8, a second grader, plants a dogwood tree at Ethel Kight Elementary School on Friday. The LaGrange Sierra Club and about 120 students planted dozens of trees at the school during an Arbor Day celebration.

LaGRANGE — More than 100 second graders at Ethel Kight Elementary School got their hands dirty Friday as they celebrated Arbor Day with members of the LaGrange Sierra Club.

The students, with help from Sierra Club volunteers, dug in the ground and planted 21 dogwood and dozens of pine trees behind their school just before lunch.

The trees, many of which were purchased using a donation from a Sierra Club member, were planted to eventually grow into a barrier between the school and a nearby industrial facility that sits just behind the school, said Sam Breyfogle, a forester by trade and a Sierra Club volunteer.

“Trees are important and they need to be properly managed,” he said during a short ceremony outside the school commemorating Arbor Day. “They provide so much more to us than shade.”

He said trees “not only add value to property,” but also important in creating a more beautiful community — especially in a city like LaGrange that was once known as “City of Elms and Roses.”

The first Arbor Day, a nationwide tree-planting holiday, was first celebrated in Nebraska on April 10, 1872, after being suggested and promoted by Julius S. Morton, a settler and newspaper editor in Nebraska City, Nebraska, according to the Arbor Day Foundation. It is estimated that as many as 1 million trees were planted across Nebraska that day.

Today, Arbor Day is celebrated nationally on the last Friday in April, but because all 50 states have varying climates, many states observe Arbor Day on different dates. Because April is too hot for tree planting in Georgia, the state legislature in 1941 declared the third Friday in February as the state’s Arbor Day. The first Georgia Arbor Day was proclaimed by the Georgia General Assembly in 1890.

LaGrange has also been a part of the Arbor Day Foundation’s Tree City USA program for 15 years. The Tree City USA program has been greening up cities and towns across America since 1976, the foundation’s website. The program is a nationwide movement that provides the framework necessary for communities to manage and expand their public trees, the site says.

To be one of the 3,400 Tree City USA communities across the nation, the city must meet four requirements of the program: maintain a tree board or department, have a city tree ordinance, spend at least $2 per capita on urban forestry and celebrate Arbor Day.

For more information on Arbor Day, visit www.arborday.org. To find out about future events with the LaGrange Sierra Club, find them on Facebook by searching “Sierra Club LaGrange Group” or email sambreyfogle@charter.net.