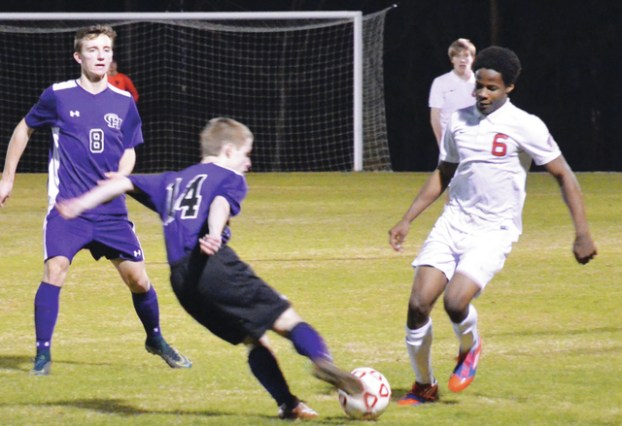 Callaway’s Khaliq Swift fights for the ball during the second half of Friday’s 2-0 win over Chapel Hill. Kevin Eckleberry | Daily News

http://lagrangenews.com/wp-content/uploads/sites/37/2016/02/web1_CHS1-5.jpgCallaway’s Khaliq Swift fights for the ball during the second half of Friday’s 2-0 win over Chapel Hill. Kevin Eckleberry | Daily News

HOGANSVILLE – That’s three up and three down for the Callaway High boys’ soccer team.

With Friday’s 2-0 victory over visiting Chapel Hill, Callaway improved to 3-0 heading into the start of Region 5-AAA play next week.

Callaway will host Haralson County on Tuesday in its region opener.

“Last year, we only won four games, so to be sitting at 3-0 right now heading into region is huge,” Callaway coach Jake Hembree said. “That was a pretty solid team. It’s always good to get a win like that before going into region.”

Grayson Lambert scored both of Callaway’s goals, and that was plenty of support for a defense that was suffocating.

“I think the keeper touched the ball three or four times throughout the whole night,” Hembree said. “It was a very stingy defense. They really stepped up.”

BASEBALL: After a lop-sided loss to LaGrange in a preseason game, and then a blowout loss to Hardaway in the regular-season opener, the Callaway Cavaliers headed to Pike County on Friday looking for a more positive outcome.

“They needed that,” Callaway coach Dusty Hubbard said. “They needed to feel that competition, and kind of answer the bell. We knew it was going to take a little bit, and we also knew we weren’t as bad as we had played. We feel like we’re moving in the right direction. The challenge now is, we have to take this and move forward. We can’t relax, and can’t be content. We have to be able to keep doing the things we did tonight and get better.”

Callaway got a big lift from relief pitcher Slone Raper, who entered the game with the bases loaded and one out in the second inning.

Pike County scored two runs to take a 4-2 lead, but Raper didn’t give up any more runs during his time on the mound, and he got the win after throwing 3 2/3 superb innings.

“He came in with the bases loaded, and he got us out of that with two runs, and he pitched the next three innings and didn’t give up anything,” Hubbard said. “He just kind of settled us in. He really did a good job. Slone was really a big part of what we did today.”

Dylan Johnson pitched two scoreless innings to get the save.

Jordan Bonner got the start, and Hubbard said he threw the ball well, he just couldn’t find the plate.

At the plate, Devin Brock had two hits, and he drove in two runs with one of them, and Cortney Laye and Xavier Smith also had two hits.

“We had a different mentality,” Hubbard said. “We were aggressive. We were all for one another.”