LaGrange’s gym will be rocking once again 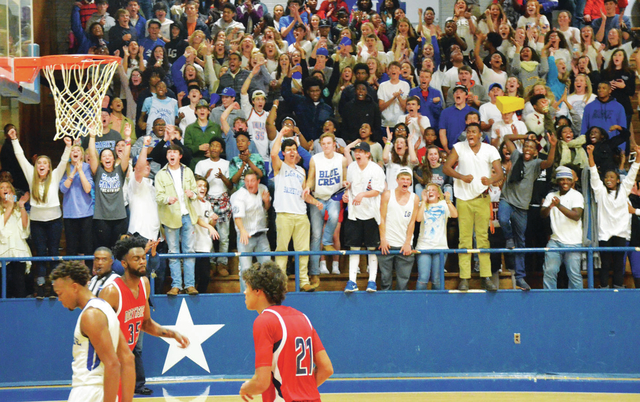 Mike Hardy, LaPerion Perry, Gabe Duckett and Kenan Gray will be on the court tonight as LaGrange plays South Paulding in the second round of the Class AAAAA state tournament. Kevin Eckleberry | Daily News

http://lagrangenews.com/wp-content/uploads/sites/37/2016/02/web1_LHS1-6.jpgMike Hardy, LaPerion Perry, Gabe Duckett and Kenan Gray will be on the court tonight as LaGrange plays South Paulding in the second round of the Class AAAAA state tournament. Kevin Eckleberry | Daily News

A boisterous student cheering section helps LaGrange enjoy a tremendous home-court advantage. LaGrange will be back home today to play South Paulding in the second round of the state tournament. Kevin Eckleberry | Daily News

LAGRANGE – The LaGrange Grangers are nearly perfect at home this season, and that’s not a coincidence.

The Grangers are a talented, veteran team, and that’s the primary reason they’ve only dropped one game on their home court despite playing an extremely challenging schedule, but there’s more to it than that.

The Grangers have a student cheering section that shows up and offers its enthusiastic, passionate and complete support game after game, and they’ll be there once again today for a second-round game in the Class AAAAA state tournament.

LaGrange will host South Paulding at 7:30 p.m., and it will be the team’s final home game of the season, win or lose.

The remainder of the state tournament will played at neutral locations, first at Columbus State, and then in Macon.

“It’s a big game, and luckily we get to play in our gym,” LaGrange head coach Mark Veal said. “The fan support has been tremendous all year. In the region tournament, the games where we came back and won, the fan support has been a factor. It gave us that extra juice to pull it out down the stretch. If you’re playing somewhere else, I’m not saying you’re not going to do it, but it’s harder.”

LaGrange hosted two thrilling games in the Region 1-AAAAA tournament, and it rallied to win both of them, including the championship game when it beat Shaw 56-55 after coming from 10 points behind in the fourth quarter.

Then in the first round of the state tournament, LaGrange blew out Drew from the get-go on the way to an 81-60 victory.

Although Drew was a four seed, it was a solid ballclub and the game was no gimme, and Veal felt the crowd may have been a factor.

“They’ve got a talented bunch. It was just a matter of which team showed up,” Veal said of Drew. “There again, playing at home with our crowd, it could have been intimidating if you’re not used to that.”

The Spartans (24-4) have won nine of their past 10 games, including a 62-58 win over Heritage in the first round of the state tournament.

Veal said South Paulding has plenty of other talented players as well.

“They’ve got a wing, a left-handed kid that can really shoot the ball,” Veal said. “And they’ve got two quick guards, and they’ve got a post that’s really physical for them. They’ve got some things they do offensively and defensively that helps them be successful.”

LaGrange will be looking for a second straight fast start.

In the first-round win over Drew, LaGrange was ahead 25-9 after the first quarter, and it led 45-18 at the half.

LaPerion Perry, who was one of 10 LaGrange players who scored in the game, led the way with 17 points, and senior guard Derieko Smith added 16 points.

“It’d be nice to do that again,” Veal said of the fast start. “If we come out and hit our first three threes, that’s be fantastic. We played great that game.”