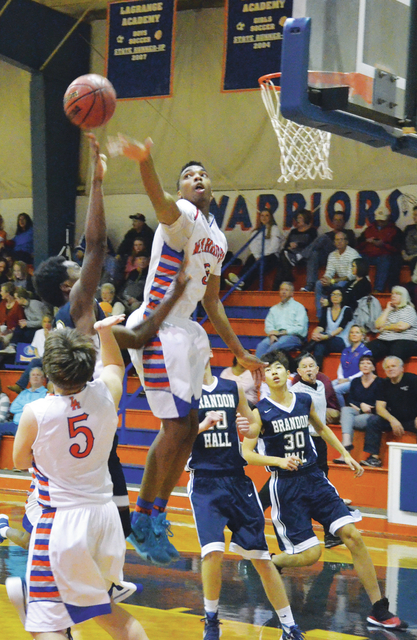 LaGrange Academy’s Will Trotter gets a pass away during the second half of Friday’s win over Brandon Hall in the third-place game of the GISA Region 1-AA tournament. Kevin Eckleberry | Daily News

http://lagrangenews.com/wp-content/uploads/sites/37/2016/02/web1_LGA4-2.jpgLaGrange Academy’s Will Trotter gets a pass away during the second half of Friday’s win over Brandon Hall in the third-place game of the GISA Region 1-AA tournament. Kevin Eckleberry | Daily News

LAGRANGE – They missed out on the chance to play for a region championship, but the opportunity to compete for the ultimate prize is still out there.

The LaGrange Academy Warriors, who lost in the semifinals of the GISA Region 1-AA tournament on Thursday, were back on the court on Friday to play Brandon Hall in the third-place game.

The Warriors won 52-40, and they’ll be the region’s number three seed for the GISA state tournament that begins next week.

The LaGrange Academy Lady Warriors, who lost to Bethlehem Temple 34-31 in Friday’s third-place game, will be the region’s fourth seed in the state tournament.

Both LaGrange Academy teams will be on the road, with the Lady Warriors playing their state opener on Tuesday, and the Warriors will play on Wednesday.

LaGrange Academy was ahead 27-22 at the half, and it outscored Brandon Hall 17-6 in the third quarter to put it away.

Now, the Warriors will turn their attention to the 16-team state tournament, and head coach Britt Gaylor believes they’re positioned to make a run at a title.

“We’re set up to make a run,” Gaylor said. “We’ve got a good matchup early, and if you look past that, we have some good matchups. So we like where we’re at.”

Gaylor said the team’s defense has improved as the season has gone along, and that was evident on Friday.

“We have gotten better defensively, which is also what you need during this time of year,” Gaylor said. “That’s going to help us make a run.”

LaGrange Academy’s girls’ team put together a nice comeback in the second half to force overtime in Friday’s game, but it was Bethlehem Temple securing the three-point win.

Trailing by 12 points, LaGrange Academy ended the third quarter on an 8-0 run to cut Bethlehem Christian’s lead to 22-18.

After falling behind by seven points early in the fourth period, LaGrange Academy continued to fight back, and when Anderson made a 3-pointer with 1:58 to play, the game was tied 30-30, which was the score at the end of regulation.

The Lady Warriors had a couple of chances in the closing moments if regulation to score the go-ahead basket, but they were unable to convert.

In overtime, LaGrange Academy had the ball at the end trailing by three points, but a potential game-tying 3-point attempt was blocked, and time ran out.

After falling behind 14-6 at the half, LaGrange Academy did a great job in the second half to get back in the game, but it wasn’t quite enough.

“We were so flat at the start of the game,” LaGrange Academy coach Mike Petite said. “We were down double digits. But we came back.”

The Lady Warriors won a region championship and reached the second round of the state tournament last season, but all five of the starters from that team graduated.

It has been a struggle at times this season, but the Lady Warriors have improved, and Petite is proud of that.

“These girls, they came every day and worked so hard,” Petite said.