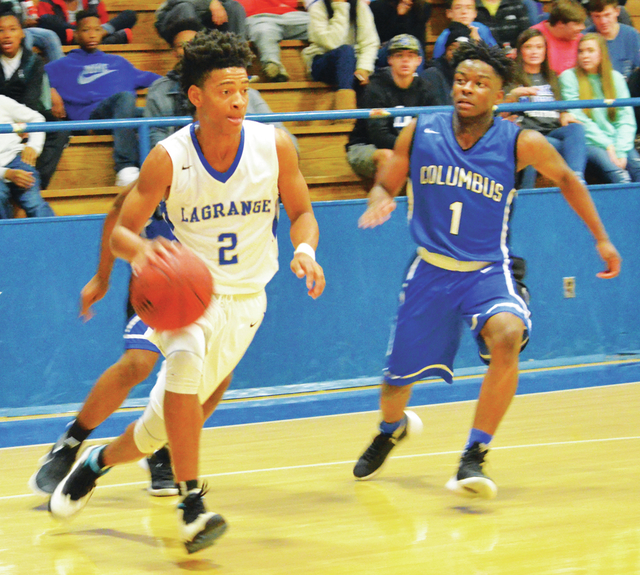 LaGrange’s Derieko Smith soars to the basket to score two of his 23 points during Saturday’s loss to South Paulding in the second round of the state tournament. Kevin Eckleberry | Daily News

http://lagrangenews.com/wp-content/uploads/sites/37/2016/02/web1_LHS2-5.jpgLaGrange’s Derieko Smith soars to the basket to score two of his 23 points during Saturday’s loss to South Paulding in the second round of the state tournament. Kevin Eckleberry | Daily News

LaGrange’s LaPerion Perry goes to the basket during the second half of Saturday’s season-ending loss to South Paulding. Kevin Eckleberry | Daily News

http://lagrangenews.com/wp-content/uploads/sites/37/2016/02/web1_LHS9-2.jpgLaGrange’s LaPerion Perry goes to the basket during the second half of Saturday’s season-ending loss to South Paulding. Kevin Eckleberry | Daily News

LAGRANGE – They made it interesting.

When South Paulding’s Anthony Brown made a free throw with 42 seconds left in Saturday’s Class AAAAA state-tournament game, the LaGrange Grangers were staring at a daunting eight-point deficit.

But with their season, and their championships aspirations on the line, there was no quit in the Grangers.

The Grangers staged a furious comeback and got within two in the closing moments, and they had the ball with a chance to win it.

A potential game-winning 3-point attempt didn’t connect, though, and it was South Paulding hanging on for a 62-60 win to advance to the elite eight.

For LaGrange, it was a disappointing conclusion to a tremendous season.

The Grangers closed with a 23-6 record, and they won the Region 1-AAAAA championship and reached the sweet 16 of the state tournament.

“We had a fantastic year,” LaGrange head coach Mark Veal said. “It would have been nice to move forward and see what happens, and we were close.”

There was a game’s worth of excitement packed into the game’s final 30 seconds.

LaPerion Perry and Alex Dantzler both made 3-pointers to get LaGrange within two, and then South Paulding added some extra drama to the occasion when it sent the wrong player to the free-throw line with less than 10 seconds left.

South Paulding was leading by two points when Kane Williams went to the free-throw line, and he missed his first attempt when the mistake was realized.

Williams’ free-throw try didn’t count, and Ja’cori Wilson, who was supposed to be shooting, then went to the line and made one-of-two attempts to give his team a 62-59 lead with seven seconds remaining.

Because South Paulding initially sent the wrong player to the line it was hit with a technical foul, and LaGrange was awarded two free throws, and Dantzler made one-of-two attempts to make it a two-point game.

LaGrange maintained possession and got a 3-point shot away that would have won the game, but it didn’t fall, and the ball went out of bounds and South Paulding took possession with one second left.

South Paulding successfully inbounded the ball, and that was that.

“The kids got down at different times, and we kept battling, and kept battling,” Veal said. “We made them earn it. We’re a tough out here at home. Unfortunately, we probably missed more shots than we did in past games, and we didn’t make free throws.”

The Grangers were 14-of-24 from the line for the game, and they only made four of their six free-throw attempts in the fourth quarter.

In the first half, Smith didn’t make any field goals, and he had five points, all from the free-throw line.

In the second half, Smith exploded for 18 points, and while it wasn’t enough to lift his team to a win, it was a fine parting shot for a player who has accomplished so much during his time as a Granger.

“I’m proud to be a Granger,” Smith said. “I love this school. I love everybody here, my teammates, the students, the coaches. It feels like home.”

LaPerion Perry, who’ll be a centerpiece of next season’s team, added 12 points, and no other LaGrange player was in double figures.

The Grangers got off to a quick start, surging to a 17-13 lead after the first quarter, with Gabe Duckett leading the way with a pair of 3-pointers.

South Paulding went on an 8-0 run to begin the second period to take a four-point lead, and it was ahead 32-28 at the half.

South Paulding led by five points two minutes into the second half, but with Smith leading the way by scoring nine of his team’s next 11 points, LaGrange fought back to take a 42-39 lead with 2:01 left in the third period.

South Paulding scored the next five points to go back ahead, but Smith’s 3-pointer gave the Grangers a 46-45 lead, which was the score as the fourth quarter began.

South Paulding took the lead 20 seconds into the fourth quarter, and it started to take control.

With less than a minute left in the game, the Grangers had only scored five points in the fourth quarter, and their prospects looked grim as they trailed by eight points.

The game was a long way from over, though.

Williams made one free throw for South Paulding to push the lead to five, and with 26 seconds left, Perry knocked down a 3-pointer to make it a 60-56 game.

Wilson then made one free throw to give South Paulding a five-point lead, and Dantzler’s 3-pointer with nine seconds remaining got the Grangers within two.

On the ensuing inbounds play, the Grangers quickly fouled.

Williams went to the line with seven seconds left, but after he took one shot, there was a protest by LaGrange, and the officials huddled and determined that the wrong player was shooting the free throws.

Wilson took one free throw and missed it, and after another huddle, the officials decided he could shoot a second one since Williams’ attempt didn’t count, and he made it.

After all of that, the Grangers still had a chance.

They trailed by three points, but they were about two shoot two technical free throws, and they were going to have possession of the ball after that.

The Grangers were unable to pull off the comeback, though, and the Spartans celebrated the dramatic road win.

“We just ran out of time,” Veal said.

OF NOTE: For more photos from Saturday’s game, go to facebook.com/LDNsports