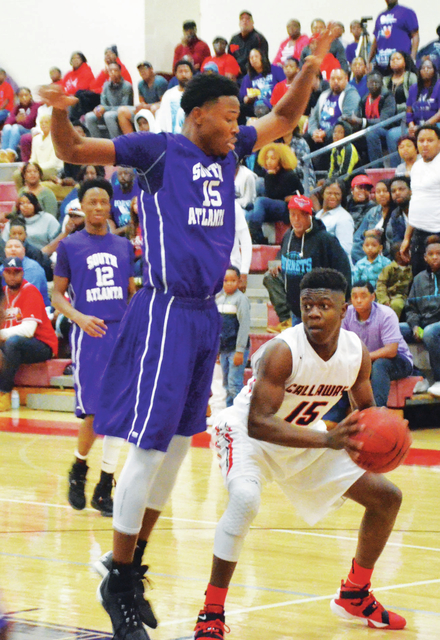 Callaway’s Ernest Patillo scored 19 points in his final high-school game, a loss to South Atlanta in the second round of the Class AAA state tournament on Saturday. Kevin Eckleberry | Daily News

http://lagrangenews.com/wp-content/uploads/sites/37/2016/02/web1_callaway6.jpgCallaway’s Ernest Patillo scored 19 points in his final high-school game, a loss to South Atlanta in the second round of the Class AAA state tournament on Saturday. Kevin Eckleberry | Daily News

HOGANSVILLE – They fought to the end.

The South Atlanta Hornets brought a top-five state ranking to Callaway for Saturday’s second-round matchup in the Class AAA state tournament, and they looked every bit like a team capable of winning a championship.

The Cavaliers hung with the Hornets step-for-step, though, and they were still within three points with 13 seconds left in the game.

But in the end, it wasn’t Callaway’s night.

South Atlanta, which got a big road win over Johnson-Savannah to reach the second round, walked away with a 79-73 victory to reach the elite eight of the state tournament, while an exceptional season came to a close for Callaway.

Under veteran head coach Terry Hayes, the Cavaliers went 20-4, and they won a fourth straight region championship while advancing at least as far as the second round of the state tournament for a third straight year.

“I’m so proud of our kids,” Hayes said. “They fought their hearts out. We made a lot of mistakes we should haven’t made, but give South Atlanta credit. They earned it.”

Trailing by six with 90 seconds left, the Cavaliers made a final push, getting as close as two points on a Sanders 3-pointer, but they were unable to completely close the gap.

Sanders, a junior who’ll headline next season’s team, led the Cavaliers with 21 points.

In addition to the four straight region titles, Callaway reached the final four in 2015, and it made it to the elite eight a year ago.

“They’ve been to a final four, the elite eight, and they went to the sweet 16 the last three years,” Hayes said of the seniors. “They went 20-4 (this season), they won four straight region championships. They accomplished a lot.”

Callaway’s Kedrick Ramsey made a free throw to get his team within five, and Sanders then knocked down a 3-pointer with 1:10 remaining to make it a two-point game.

It looked like the Hornets had things wrapped up when Frank Bailey came up with a steal and scored on the other end to put the Cavaliers in a 75-69 hole with just 41 seconds left.

The Cavaliers still had some life left, though.

After the Hornets made one free throw with 19 seconds left, Sanders knocked down two free throws with 13 seconds remaining, and Callaway was within three.

Artavious Banks, who led his team with 21 points, made two clutch free throws with 11 seconds left to extend the lead to five, and when the Cavaliers missed and couldn’t come up with the rebound, the Hornets had the victory secured.

Callaway started quickly, jumping out to a 14-6 lead, but South Atlanta finished the first quarter on a 12-2 run to go ahead 18-16.

In the second quarter, Patillo scored nine points and was 5-of-5 from the free-throw line to help the Cavaliers take a 34-33 lead at the break.

South Atlanta has formidable post presence, and Patillo and Brown both did a great job of holding their own.

“Ernest played his heart out, and I thought Joe came in and played great,” Hayes said.

The Cavaliers went up by as many as five points when Sanders made a 3-pointer with 1:33 left in the third quarter.

After South Atlanta tied it, Wortham made two free throws to give Callaway a 55-53 lead, and that was the score when the fourth quarter began.

The Cavaliers took the lead for the final time with 3:33 remaining when Patillo went strong to the basket and was fouled, and he made the free-throw to complete the three-point play, giving his team a 64-63 advantage.

Banks answered with a basket to put the Hornets on top 65-64 with 2:57 left to play, and they held the lead the rest of the way.