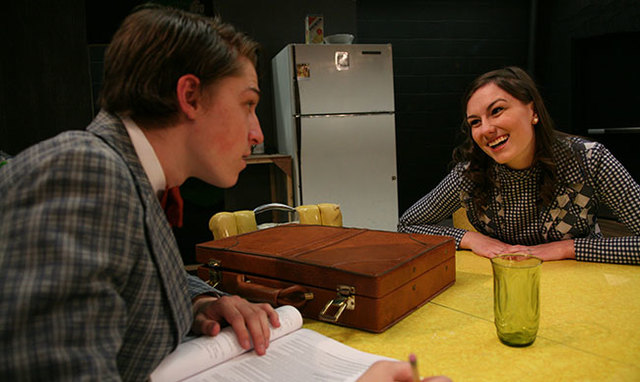 LaGrange College students Eli Grant and Meagan Cascone rehearse a scene from the Pulitzer Prize-winning play ‘Crimes of the Heart,’ opening Wednesday in the Lab Theater in Price Theater.

http://lagrangenews.com/wp-content/uploads/sites/37/2016/02/web1_crimes-1.jpgLaGrange College students Eli Grant and Meagan Cascone rehearse a scene from the Pulitzer Prize-winning play ‘Crimes of the Heart,’ opening Wednesday in the Lab Theater in Price Theater.

For many, the kitchen is the heart of a home.

“People are comfortable in kitchens,” said director Tracy Clahan Riggs, instructor of theater arts at LaGrange College. “It’s where they gossip and fight, laugh and cry. In other words, life happens in kitchens.”

She said that rings true in “Crimes of the Heart,” LaGrange College’s Theatre Arts production that opens Feb. 24 in the Lab Theater in Price.

Written by Beth Henley, the Pulitzer Prize-winning play takes place in the family kitchen of the Magrath sisters in Hazelhurst, Mississippi.

“We’ve used scenes from this play in acting classes, but I’ve never done it in its entirety,” she said. “It’s always been a favorite, and the opportunity to do a small-cast show in the lab was a perfect fit.”

The story revolves around three sisters: Lenny, the oldest, whose life is consumed by caring for their grandfather; Meg, the aspiring singer who is hiding a secret; and Babe, the youngest, who is in jail for shooting her senator husband.

“These characters are all flawed human beings,” Riggs said. “But it is how they move forward and laugh through their pain that is the heart of this play.”

Elder sister Lenny, played by senior Nikki Stone, is caregiver of the family patriarch who is on his death bed in a local hospital.

Still single at 30, Lenny is worried that love may have passed her by.

Junior Lizzy Clements plays Meg, a musician who has returned home after her career attempt failed.

“Coming home is her way of escaping disappointment,” Lizzy said. “She lives in her own reality and won’t let herself think about failing.”

Little sister Babe is the last person anyone thought would fire a shotgun, much less one aimed at her husband. But junior Meagan Cascone said there is a lot more to her character than people realize.

“She’s not dumb,” Meagan said. “She was a little sheltered growing up and she chooses to look on the bright side of things. But she is perfectly aware of everything going on around her.”

Snooty cousin Chick, played by sophomore Kelsey Seals, is determined to put herself into everyone’s business.

“Chick’s life is a wreck,” Kelsey said. “She has to be on top of everyone else’s life to keep her own from falling apart.”

“He has just graduated from law school and has returned to his hometown,” Eli said. “This is his first case and he wants to make a statement, but his attraction to Babe is becoming a distraction.”

Chris Senn’s character of Doc appears only in two scenes, but audience members have heard about him throughout the play.

“You feel like you know him before you even see him,” Chris said. “The play builds up to the scene with Meg, his first love. There is so much unsaid, but you still understand everything those characters are feeling. That’s a huge credit to Beth Henley, the playwright.”

Director Riggs said the pain of the dysfunctional Magrath clan gives the play its dark humor and heart.

“Beth Henley really understands these women,” Riggs said. “She lived in Mississippi and writes about its people beautifully. I love the way the New York Times described her writing. ‘…she can serve us pain as though it were a piece of cake.’”

“Crimes of the Heart” opens Wednesday and runs through Sunday in the Lab Theater in Price with shows at 7:30 p.m. Wednesday to Saturday and 2:30 p.m. Sunday. Tickets are $10 for adults, $8 for senior citizens, 55 and older, and non-LC students, and free for LC students faculty and staff. The box office is open weekdays from noon until 4 p.m. Reservations can be made by email at priceboxoffice@lagrange.edu, or by calling 706-880-8080.