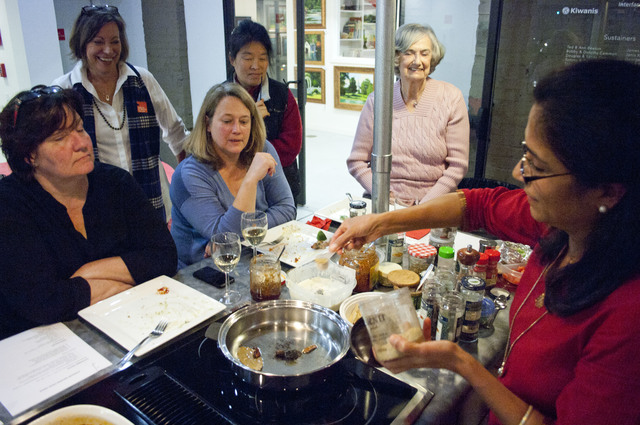 A student at a cooking class tries a sample of Meenakhi Gupta’s Tandoori Chicken on Thursday at the Center for Creative Learning.

http://lagrangenews.com/wp-content/uploads/sites/37/2016/02/web1_Cooking02WEB.jpgA student at a cooking class tries a sample of Meenakhi Gupta’s Tandoori Chicken on Thursday at the Center for Creative Learning.

LaGRANGE — The allure of spices that motivated the English, Dutch and French to colonize India during the early 17th century still has some draw.

The smells of cumin, coriander and cardamon brought about half a dozen people to the LaGrange Art Museum’s Center for Creative Learning on Thursday to learn about Indian cuisine, culture and cooking.

During the second of four “Cooking Around The World” classes, Meenakhi Gupta, a physician and impromptu cooking instructor, taught students some of her favorite recipes from her native India and shared her tips — and even some samples.

“This is my first time teaching a cooking class,” Gupta said. “I’ve really enjoyed it. It’s been very nice and the people have been great.”

Gupta said she loves to cook, particularly on the weekend when she has the time to devote to some of her more challenging and time-consuming dishes.

“Cooking is my passion,” she said. “My job (as a physician) is just my safety net.”

Many of the dishes Gupta showed students how to prepare had a signature spicy kick to them, and there’s a reason for that, she said.

“In India, we eat a lot of foods that heat and cool you from the inside,” she said. “It’s hot in the summers (in India) and cold in the winters. There’s no air-conditioning in most houses, and a lot of the homes are made from concrete and cinder block.”

She explained that the spice in many of the dishes help keep warm in the cold months, and ingredients like yogurt help cool the pallet in hot summer months.

Jennifer Cannady of LaGrange, a student at the cooking class, said she’d enjoyed both classes in the series so far, and was looking forward to trying some of the recipes at home. She also attended the first cooking class, which taught Korean foods including sushi.

“I had the most fun,” she said. “I posted a few pictures of the sushi on Facebook, and I had friends who I hadn’t talked to in years come out of the woodwork wanting to know how I found out about the class.”

During Thursday’s Indian cooking class, Cannady said she enjoyed the samples Gupta prepared, although she’s not sure if she’d be able to re-create it at home.

“The Tandoori Chicken is wonderful,” she said. “It’s something I would definitely order at a restaurant.”

Sallie Keith, the museum’s education director, said she’s proud to offer a series like “Cooking Around the World” because it provides an opportunity for people to learn about other places in the world.

“It’s a social time, it provides some ‘me time’ for adults and it’s a cultural exchange,” she said. “It’s a great chance to learn about other people and cultures that are right here in LaGrange.”

The “Cooking Around the World” series continues Thursday with Mexican food and March 3 with Italian food. Registration is still open and classes are $40 per session. For information or to sign up, call the LaGrange Art Museum at 706-882-3267. The museum is closed on Mondays.

• 2 dried chilies (if you can’t find these, then use paprika for color)

To make the marinade, toast the dried spices in a cast-iron skillet until fragrant, three minutes or so, shaking the pan. Then, pour the spices into a spice grinder and grind them until you get a fine powder. Make a paste of the garlic and ginger with one to three teaspoons of water in a blender.

In a large bowl, whisk together the spice mixture you just made with the yogurt, oil, malt vinegar, salt, ground cinnamon, paprika, turmeric, cayenne pepper, garlic and ginger until well combined. It should smell amazing. Taste and adjust with more salt if it needs it.

Prick the chicken thighs with a fork. Add the thighs to the marinade and toss to coat. Marinate for at least one hour in the fridge, and at most overnight.

When you’re ready to cook, line a baking sheet with foil, and turn your broiler on. Place each chicken thigh on the backing sheet, making sure each one is coated with marinade, but not swimming in it. Cook the chicken thighs under the broiler until they start to blacken, about five minutes. Then turn the oven to 350 degrees, and cook until a meat thermometer inserted in the meatiest part of the thigh registers 160 degrees, another 10 minutes. Remove from oven.

Serve the thighs on a platter with fresh squeeze of lime.

Note: All temperatures in Fahrenheit.