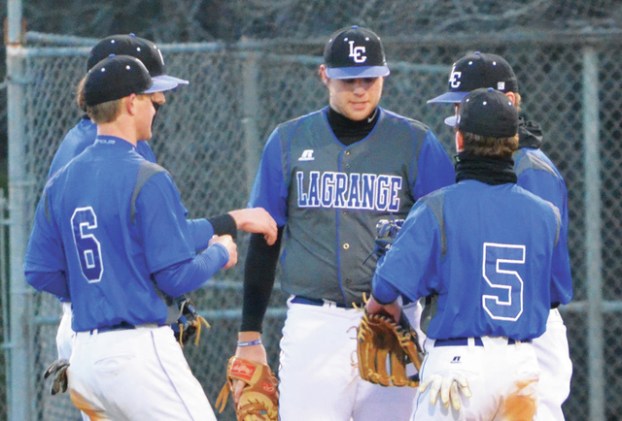 Local baseball teams get their swings in this week

Craig Garner’s Troup Tigers have two games this week as they look to improve on their 1-0 record. Kevin Eckleberry | Daily News

http://lagrangenews.com/wp-content/uploads/sites/37/2016/02/web1_troup.jpgCraig Garner’s Troup Tigers have two games this week as they look to improve on their 1-0 record. Kevin Eckleberry | Daily News

They needed that one.

The Callaway High baseball team began the season by getting blown out 11-1 by Hardaway, and that came on the heels of an 8-0 loss to LaGrange in a preseason game.

So as the Cavaliers headed to Zebulon to play Pike County on Friday, they were looking for something positive to jump-start their season.

The Cavaliers were trailing 4-2 after the second inning, but they rallied for a 6-4 victory, giving them their first victory of the season.

“They answered the bell,” Callaway head coach Dusty Hubbard said. “They played the way we needed them to play and played a good ballgame.”

This week, the Cavaliers will try to keep the momentum going with three games on tap.

Callaway has a game scheduled at Alexander today, although rain could be an issue.

Callaway returns home for games on Thursday and Friday against Manchester and Shaw, respectively.

The Cavaliers are a new-look team this season after getting hit hard by graduation following an extremely successful 2015 season, so Hubbard figured there might be some growing pains.

After the LaGrange and Hardaway games, Callaway had to go play a Pike County team that always presents a difficult challenge.

Pike County took the lead in the second inning, but it didn’t score again, with Slone Raper and Dylan Johnson doing a nice job in relief.

Devin Brock had two hits, and he drove in two runs with one of them, and Cortney Laye and Xavier Smith also had two hits.

Now the Cavaliers will try to put together their first winning streak of the season, and Hubbard said it’s critical for no one to feel satisfied.

“We knew it was going to take a little bit, and we also knew we weren’t as bad as we had played,” Hubbard said. “We feel like we moved in the right direction. The challenge now is, we have to be able to take this and move forward. We can’t relax. We’ve got to be able to keep doing the things we did tonight and get better.”

LaGrange and Troup were both supposed to be at home today, but those games are in doubt because of the rain.

LaGrange, coming off its wild 18-17 loss to Central-Phenix City on Saturday, was scheduled to host Newnan today before visiting Woodland-Cartersville on Friday.

After opening the season with a 9-2 win over Spalding County, LaGrange went 10 innings against Central-Phenix City and lost 18-17.

Including the preseason game against Callaway, LaGrange has scored 35 runs in 24 innings of baseball.

In the Central game, Larkin Easterwood hit two home runs, Jake Farrar had one, and everyone in the lineup contributed, which has been a common theme through three games.

Troup has played one game, and it beat Northgate 8-4 last week.

The Tigers had 12 hits in that game, and Brandon Gay, who is taking over the catching duties from Jonathan Foster, hit a home run.

Winston Turner, one of the many veterans returning from last season’s outstanding team, got the start and was the winning pitcher.

Troup was scheduled to host East Coweta today before visiting Auburn (Ala.) on Thursday.

OF NOTE: For news of game postponements, go to @lagrangesports on Twitter.