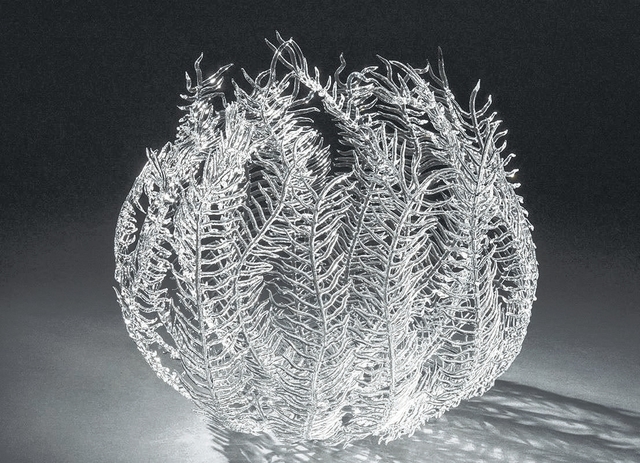 This flameworked borosilicate glass sculpture, ‘Glass Seaweed,’ by Columbus-based artist Emily Williams was the LaGrange Art Museum National XXVII purchase award winner. Williams will be merit juror for this year’s first regional juried exhibit by the museum, using only works by artists from the Southeast.

LaGRANGE — LaGrange Art Museum’s first LaGrange Southeast Regional juried exhibition is underway and will be on display through April 2.

The new juried exhibit replaces the national exhibit that reached its 28th showing last year, according to a press release from the museum.

“The LaGrange National, held as a biennial in conjunction with LaGrange College, long served to expand our community’s exposure to contemporary art from around the United States and added to the museum’s permanent collection,” said Bobby Cammon, museum board president, in a press release. “That being said, this year for the first time in many, many years the LaGrange College Lamar Dodd Art Center opted to pursue its own invitational exhibit, focused on photographers from Georgia.”

In response, the museum board chose to restructure the bi-annual from national to regional with the intent to later partner with the college again, Cammon said.

This change of focus comes on the heels of a gift from Charles and Joy Flint, owners of the exhibit Norman Rockwell: The Man Behind the Canvas, which premiered at the LaGrange Art Museum in 2014. The Flints extended to the museum the rights to tour the exhibit in perpetuity, so long as funds were used “in large part to purchase and acquire works by folk and outside artists of the lower Chattahoochee trace.”

“We had no idea what to expect, given that we were moving from a national to a regional, and that the Southeast did not constitute a particularly large portion of the country,” said museum Executive Director Karen Anne Briggs. “We restricted participation to artists living in Georgia, North Carolina, South Carolina, Alabama, Mississippi, Tennessee, Kentucky, Louisiana and Florida. We were stunned by the response to the show.”

The exhibit features art selected from more than 450 works submitted by almost 150 artists representing the 12-state Southeastern region of the United States. Awards will be made in three categories: purchase, directors’ and juror’s merit.

Atlanta-based mural artist Deanna Sirlin agreed to serve as merit juror and to make the merit awards selections. Sirlin was commissioned to create the National Endowment for the Arts-funded wall mural on the museum’s newly remodeled Center for Creative Learning on Lafayette Parkway.

“The Museum has slowly begun to expand its collection of works by such regional artists as Butch Anthony, Lamar Baker, Eddie Martin, C.X. Gordy and John Henry Toney, as well as many others both named and anonymous — both through purchase, trade and long term loan,” Cammon said.

The museum purchased a glass sculpture by Columbus-based artist Emily Williams during the LaGrange National XXVIII, which illustrates the museum’s “renewed focus on the region,” states a press release from the museum. Williams’ work will be featured as part of the regional exhibit.

Williams creates detailed glass sculptures inspired by the nature. Her glass sculptures explore complex plant and sea life forms. Childhood visits to areas like the Petrified Forest National Park in Arizona and Monument Valley Navajo Tribal Park in Utah inspire her work, as well as her early exposure to the Smithsonian Institution in Washington, D.C., where her grandmother worked as a docent for 20 years.

“When growing up there were many old medical books of my father’s laying about,” Williams said about her further inspiration. “I loved pouring over the photographs and illustrations.”

She is now working on a series of sculptures exploring complex sea life forms. The new glass work is influenced by 19th century scientific illustration and scientific glass models.

The First LaGrange Southeast Regional is sponsored by the Callaway Foundation and the LaGrange Art Museum with special support provided by the Charlie & Joy Flint Fund.