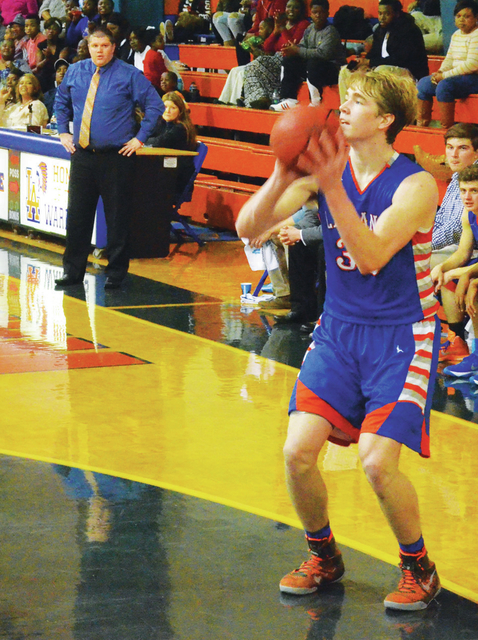 LaGrange Academy’s Leah Major gets ready to pass the ball away while head coach Mike Petite looks on during a game this season. LaGrange Academy will play Crisp Academy in the first round of the GISA Class AA state tournament today. Kevin Eckleberry | Daily News

http://lagrangenews.com/wp-content/uploads/sites/37/2016/02/web1_LGA1-2.jpgLaGrange Academy’s Leah Major gets ready to pass the ball away while head coach Mike Petite looks on during a game this season. LaGrange Academy will play Crisp Academy in the first round of the GISA Class AA state tournament today. Kevin Eckleberry | Daily News

LAGRANGE – A year ago, the LaGrange Academy Lady Warriors were a veteran, senior-oriented team, and they reached the second round of the state tournament after winning a region championship.

Flash forward a year, and the Lady Warriors are once again preparing for a state-tournament game, but this is a much different team.

There are no seniors, and it’s an entirely different starting lineup from a year ago.

And while it has been a struggle for much of the season, what the Lady Warriors have done is steadily improve, and they played their best basketball at the end of the season.

They put together their first winning streak in the final week of the regular season, and they overwhelmed Solid Rock Academy 41-23 in the first round of the GISA Region 1-AA tournament.

LaGrange Academy dropped its next two games in the region tournament, but it did enough to qualify for the GISA state tournament as the number four seed from Region 1-AA.

Crisp Academy, the number one seed from Region 3-AA, will host LaGrange Academy at 7 p.m. today in the first round of the 16-team tournament.

It’s a big-time challenge for the Lady Warriors, but just the fact that they made it this far is a big accomplishment.

After the region-tournament win over Solid Rock, head coach Mike Petite said “we’ve already accomplished our goal. We qualified for the state playoffs. Since Oct. 19, our first day of practice, the only thing we talked about is February is what matters, and let’s play our best in February. Let’s qualify for state, and let the rest of it rip.”

The Lady Warriors’ leading scorer this season is Leah Major, who scored 22 points in the win over Solid Rock that wrapped up a state-tournament berth.

Laney Anderson has also been a productive scorer this season, and she has had numerous games where she was in double digits in points.

In the win over Solid Rock, Felicity Liechty scored 10 points and had 11 rebounds, and in that same game, Ashlee Mains had 15 rebounds and two blocked shots.

Petite said no matter what happened during the season, the players “came every day and worked so hard.”

The winner of today’s game will play either Robert Toombs Christian or Brentwood in a second-round game on Friday.

The Warriors dropped a close one to Bethlehem Christian in the tournament semifinals, but they bounced back to beat Brandon Hall to sew up the number three seed.

Highland Christian, the number two seed from Region 3-AA, will host LaGrange Academy on Wednesday at 5:30 p.m. in a first-round game in Valdosta.

Highland Christian reached the championship game of its region tournament before losing to Grace Christian Academy 54-37.

In the semifinals of the region tournament, Highland’s Josh Sharper scored 29 points in a 56-49 win over Georgia Christian, so he’ll be a player LaGrange Academy will need to keep an eye on.

If LaGrange Academy beats Highland Christian, it would play either First Presbyterian or Piedmont in a second-round game on Saturday.

The Warriors need two wins to reach the final four in Macon, and three wins would land them a spot in the championship game.

All of the remaining teams now face the pressure of a win-or-go-home scenario, and LaGrange Academy head coach Britt Gaylor said that’s what makes this time of year so enjoyable.

“It’s fun,” Gaylor said. “Some people may think it’s stressful, but we love it. That’s what you work for all year. I look forward to preparing for whoever we play Wednesday.”

The Warriors appear to have what it takes to make a run at a title.

They have one of the state’s top post players in senior Whit Moreman, and Lincoln Anderson has been a force inside as well in his first season after transferring from Callaway.

Complementing those two players are a handful of players including Colby Heath, Zach Callaghan, Will Trotter and Mason Brown who can knock down shots from the outside so teams can’t focus all of their attention on the big men.