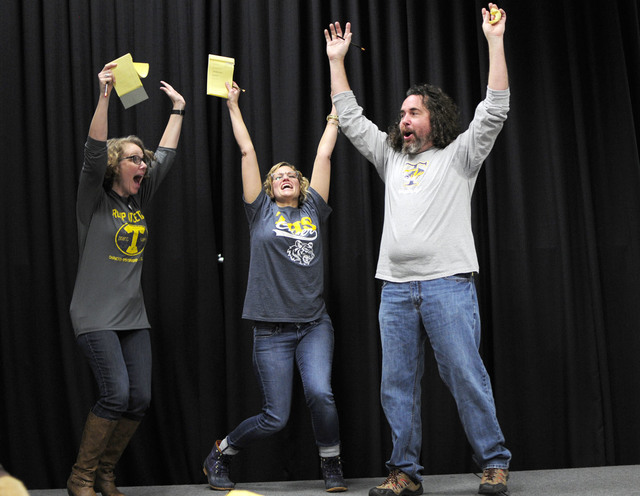 Members of the Troup High School team, Two Chicks and a Guy, on Monday celebrate their victory at the 18th annual CLCP Spelling Bee. From left are Kathy Kirby, Michelle Ashmore and Chance Giddens.

http://lagrangenews.com/wp-content/uploads/sites/37/2016/02/web1_web0223CLCPspellingBee.jpgMembers of the Troup High School team, Two Chicks and a Guy, on Monday celebrate their victory at the 18th annual CLCP Spelling Bee. From left are Kathy Kirby, Michelle Ashmore and Chance Giddens.

LaGRANGE — For the victorious team in Monday’s 18th annual CLCP Spelling Bee, the win gave a notch on the belt of one member in her friendly rivalry with a former teammate.

The Troup High School team, Two Chicks and Guy, took the crown at the bee during a sudden-death match with the team from Batson-Cook and LaGrange Academy, To BEE or Not to BEE. For THS fine arts and chorus teacher Kathy Kirby, her team’s success included defeat of her former spelling bee partner, LaGrange Academy teacher Jack Bagley.

The academy has won twice in the past four bees, and Bagley and Kirby were victorious on a team in 2012.

“… We won together, and then we ‘broke up,’” Kirby said as she and Bagley reminisced. “… And finally I got to beat him, because he’s won a couple of times. …”

“I’m glad I lost to you,” Bagley responded.

The win also was the second time in about seven years for a Troup High team, said member and THS teacher Chance Giddens. He was on the first team to win with two other teachers and a THS team has competed every year since. The educators now are determined to defend their crown next year, he added.

The team faced some tough challenges in this year’s competition. Among the harder words they had to tackle was cartouche, which they got right. They were tripped up in the final round by suzerain, “a dominant state controlling the foreign relations of a vassal state but allowing it sovereign authority in its internal affairs,” according to Merriam-Webster’s dictionary.

Giddens joked that he and teammate Michelle Ashmore were social studies teachers and didn’t know the word immediately.

“We are just happy to help out the CLCP literacy program,” Giddens said. “As educators, we understand the importance of literacy in the home, and anything we can do to help young people be more prepared by the time they get to high school, the more we’re willing to do.”

Although participation was lower than previous years, CLCP Executive Director Debbie Burdette said it met the group’s fundraising goal of $5,000.

“This is the 18th (spelling bee), and although we didn’t have as many teams as we’ve had (in previous years) — we had one team drop out because of sickness — but I think it was a great event,” Burdette said. “We had fun, and a good crowd, and it was a good event.”

The THS team members thanked Burdette for putting on the bee.

Ashmore was also “really excited that I joined the team because it’s an awesome experience, and any chance to help out literacy and the Troup community,” she said.

“… Thank you so much for inviting us and we hope to be back next year,” she added.

Giddens was also excited about the win.

“It’s really, really nice. I can now add this to my resume: the repeat spelling bee champion,” he said with a laugh.