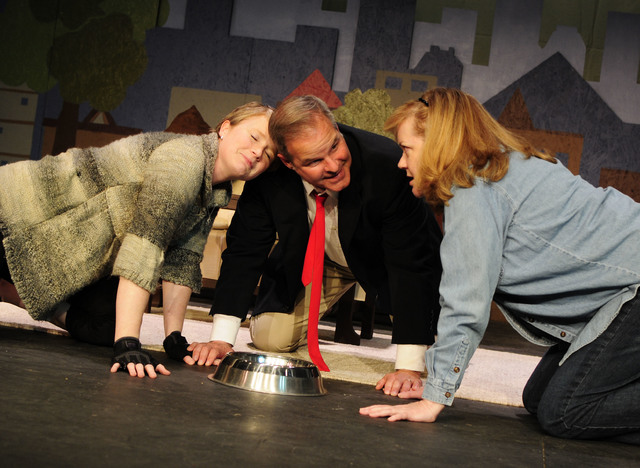 During a scene from the play ‘Sylvia,’ Kate, played by Cathy Hunt, tries to stop dog Sylvia, played by Valerie Longshore-Sargent, as she bounds over a couch to greet Kate’s friend, played by Janet Wyche. Kate’s husband and Sylvia’s obsessed owner, Greg, played by Jim Hunt, looks on. The Lafayette Society for Performing Arts production begins Thursday.

LaGRANGE — A husband looking for meaning during a mid-life crisis decides to bring a third party into his relationship. She fights with his wife, she’s noisy and over-affectionate — and she’s a dog.

That’s the setup for the Lafayette Society for Performing Arts’ Lafayette Theatre Company performance of “Sylvia,” a comedy “that still has meat to it,” in the form of some serious examination of relationships, noted director Jeff Sargent.

Sargent saw the play performed by the LaGrange College theater group about 15 years ago and “fell in love with it.” He said it was one of the funniest plays he’d seen, and he liked its serious undertones. When the theater company began plotting out plays for this season, Sargent wanted something funny, relatable and different.

“I was looking for something light with a high degree of audience appeal,” he said. ” We do a lot of Neil Simon plays and plays everybody knows, and I wanted something new, something fresher.”

In the play, the title character is a stray dog picked up by Greg, played by Jim Hunt, a husband who recently moved to the city with his wife.

“I work on Wall Street, and I’m starting to question what’s real and what’s important,” Jim Hunt said of his character. “And I discover this stray dog that gets me tuned in to what I think is natural and instinctive to become who I really believe — what Greg, in his heart (and) mind, will cause him happiness.”

Greg’s wife, Kate, however, is looking for peace and to enjoy having fewer responsibilities with the children gone, said Cathy Hunt, who plays Kate.

“It causes undue stress,” Jim Hunt said of the on-stage couple’s relationship. “Something she wasn’t ready to settle on, she’s thrown a curve ball (and reacts) just like anyone would do.”

Sylvia also isn’t an ordinary dog, at least from the audience’s perspective. Played by Valerie Longshore-Sargent, Sylvia spends about as much time on two legs as four, and is at no shortage of words.

“She barks at everyone, and everyone, as we do with our animals, we think we know what they’re saying with their eyes, by their body language, ” Jim Hunt said.

“Physically, I guess, would be the most challenging,” Longshore-Sargent said. “Trying to find the balance of not being on all fours all the time … She’s upright and talks to some characters eye to eye … She’s all over the furniture, she’s all over the floor — obviously like a dog would be.”

She studied her dog, Smalls, as the basis for her movements and mentality for the role.

“My own dog is most definitely the inspiration,” she said. “She was a rescue, and they say your animals pick you, and that was the case — she picked me. … She’s a member of the family.”

Because of how she feels about her dog, Longshore-Sargent sympathizes with Greg’s perspective of Sylvia and feels that audiences will make connections to either Greg or Kate in the same way.

On the other side, Cathy Hunt feels a connection to her character. Like Kate, she is a retired English teacher whose children are grown.

“She is an antagonist from the standpoint she is in conflict with Greg, but is Greg a good guy or not?” Cathy Hunt said. “Because the audience will understand that Greg is being super crazy, which causes Kate to be super resentful. So some people might sympathize with Greg and his love of the dog, and some may totally understand Kate and the fact that she is really not happy about bringing this dog into their lives.”

One of the side characters who will inject some more confusion in the couple’s lives, and comic relief for the audience, is Leslie. An androgynous shrink who switches between feminine and masculine, Leslie tries to empathize with the gender of the person she is talking to.

“It’s my first foray into gender-bending,” said Melissa Stanley, who plays the shrink. “Yes, (it’s challenging). I’m trying to work on playing up the masculine gestures … so hopefully it equals my natural femininity and charm. … It’s been fun. I haven’t played a role like this before.”

Fun is the key word the cast uses to describe the show.

“The show is just fun,” Longshore-Sargent said. “I think that most people are going to be able to relate to it, whether they are a dog owner or a dog lover or just an animal lover, they are going to see themselves in the show. That’s the best thing about theater, it imitates life.”

“Sylvia” performs Thursday, Feb. 25, to Saturday, Feb. 27, at 7:30 p.m. Performances are in the Black Box Theater on Bull Street. The play is a dinner theater, where patrons who arrive early may bring food or order from Mare Sol at the theater, or pre-order on the LSPA’s website. Tickets may be purchased at www.lsparts.org or by calling 706-882-9909.