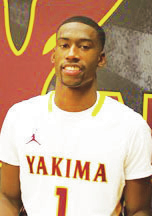 When his opportunity arrived, he was ready.

During his first season on the Yakima Valley (Wash.) Community College basketball team, former Troup Tiger Demetrius Trammell was a role player who averaged about seven points per game.

As the team prepared for the 2015-2016 season, Yakima head coach Ray Funk let Trammell know his role was about to expand greatly.

No longer would Trammell just be a complimentary piece, he was going to be focal point of the offense, a player who would be counted on to deliver night after night for the team located in Washington state.

Trammell said he “embraced” that chance.

“During the summer, we had workouts, and (Funk) was telling me there was going to be a big role for me to come in and start, and fill the shooter role, and have a green-light mentality,” Trammell said. “So I was looking forward to it. I knew it was going to be a good season.”

Turns out that optimism was well-placed.

Trammell is the team’s second-leading scorer at 16.4 points per game, and he has been Stephen Curry-like consistent from the outside.

Trammell has made an impressive 49 percent of his 3-point attempts, and he is tops in the Northwest Athletic Conference in that category.

During his senior season at Troup in 2012-2013, which was also Thermond Billingslea’s final season on the bench as head coach, Trammell was a prolific scorer, averaging more than 17 points a game.

During the recruiting process he had options, and he ended up signing with William Penn University, an NAIA school in Iowa.

Trammell was red-shirted at William-Penn, and never saw any time on the court in a game.

After that season, Trammell decided he wanted to go somewhere else, and for the second time he began searching for a college home.

“I was going to work out with this community college in Georgia,” Trammell said. “They said their roster was already full, so they referred me to the coach here. And so I sent my film, and it went from there.”

Trammell jumped at the chance, even though he’d be going even further from home.

“It was a pretty easy decision,” he said.

Now more than a year into his time in the Pacific Northwest, Trammell knows he made the right choice.

“It’s working out really great,” Trammell said. “It’s a good program. I’m glad I came. I get to see a new part of the world, too. It’s different from the south.”

Trammell has also enjoyed having some success this season after the team struggled to a 5-23 record a year ago.

Yakima is 13-13 overall, and it is 7-5 in conference play, a marked turnaround from last season.

“We have a lot of talent on our team this year,” Trammell said. “I feel like we can do good things in the (conference) tournament.”

Since Yakima is a two-year school, Trammell will be with a different team next season, and thanks in large part to his performance this season, he’ll have multiple options.

“I’m talking to like five Division II schools right now,” Trammell said. “It’s definitely opened up things, having a good season like this.”