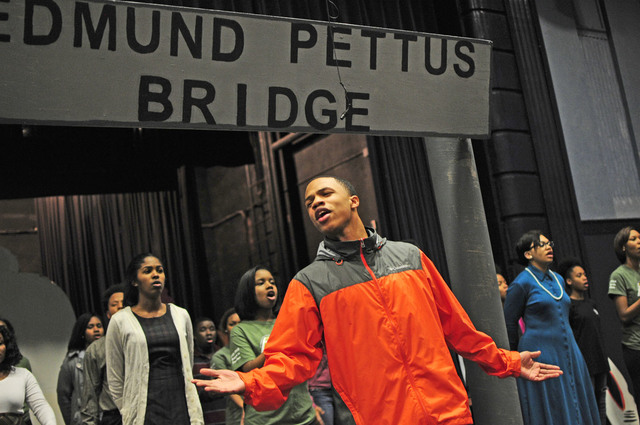 Teon Stanley, left, sings with a group of fellow students in preparation for the LaGrange High School black history program, which debuts Friday. The play features music and a story focusing on a family in Selma, Ala., in 1965 as they are caught up in the events that led to the Voting Rights Act.

http://lagrangenews.com/wp-content/uploads/sites/37/2016/02/web1_web0224LHSblackHistory.jpgTeon Stanley, left, sings with a group of fellow students in preparation for the LaGrange High School black history program, which debuts Friday. The play features music and a story focusing on a family in Selma, Ala., in 1965 as they are caught up in the events that led to the Voting Rights Act.

LaGRANGE — It’s an election year, and LaGrange High School assistant principal Kenneth Redding hopes to remind people not to take for granted their right to vote.

For this year’s installment of the LHS black history program, Redding’s original production takes the audience to Selma, Alabama, in 1965. It focuses on a family there during the Selma to Montgomery marches that spurred the passage of the Voting Rights Act and their polarized view of the issue.

“I feel like it’s important to highlight this,” Redding said. “… I think it’s really good because it’s election time right now and we talk about voting, and that was the last piece of suffrage, the first thing was the universal white male, then added women, and then added more groups and finally African-Americans in 1965. So we are highlighting events leading up to the Voting Rights Act.”

The principal cast is comprised of the fictional Reed family, whose patriarch, Willie Reed — played by LHS student Teon Stanley — is 83 years old and determined to vote for the first time. As the Student Nonviolent Coordinating Committee, a grassroots movement, works in the town to try and register black voters — despite the South’s overly restrictive voting laws toward African-Americans — the Southern Christian Leadership Conference and Martin Luther King Jr. come to town to protest for change, leaving Reed to consider the different paths each organization proposes.

His grandson, Freddie Reed — played by Gardner Newman Middle School sixth grader Patrick Barnett — sides more with the grassroots SNCC, resenting the sudden arrival of King and SCLC to temporarily shine a national spotlight on their town and move on.

“I’m very serious about everything,” Barnett said of his character. “I’m an outgoing character trying to win the right to vote, but he wants to do it his way, but instead, other people are insisting to do it the nonviolent way.”

Redding recruited the Gardner Newman student to perform among the high school students. Although it was different for Barnett to work with an older age group, he said they have mutual respect and he feels comfortable with the ensemble.

He clashes with his sister, played by the actor’s real-life sister and LHS student Emily Barnett, who sides more with the SCLC.

Their mother, played by LHS student Kenyetta Cotton, is left trying to keep the peace.

The family’s disagreements also reflect the historical disagreements that took place during the play’s time period, with the rivalry in ideals between the SNCC and SCLC.

“We try to highlight that rivalry and friction, and one thing we try to show is that there was not total agreement between people in the movement,” Redding said. “They don’t show that on camera, but when you research it — they were not totally together. There was a lot of arguing behind the scenes, but when it’s all said and done, they were together.”

Outside of the Reed family, other actors will take up the mantle of historical civil rights leaders involved in the movement, including King.

A traditional part of Redding’s productions are the musical numbers. This year will feature performances of period music from artists like Smokey Robinson and the Miracles, Jackie Wilson, Dionne Warwick and Otis Redding. There are also gospel and contemporary songs, along with original compositions by Redding; one he noted is “Dr. King, What Shall We Do?” which highlights King’s struggle to determine what actions he should take in Selma.

As part of his message on the power of voting rights, Redding said someone will be in the lobby of the theater after performances for eligible students to register to vote.

The LaGrange High School black history program performs Friday and Saturday at 7 p.m. and Sunday at 4 p.m. in the LHS auditorium facing Highland Avenue. Tickets are $8 in advance or $10 at the door. Advance tickets are available by calling Redding at the high school, 706-883-1590.