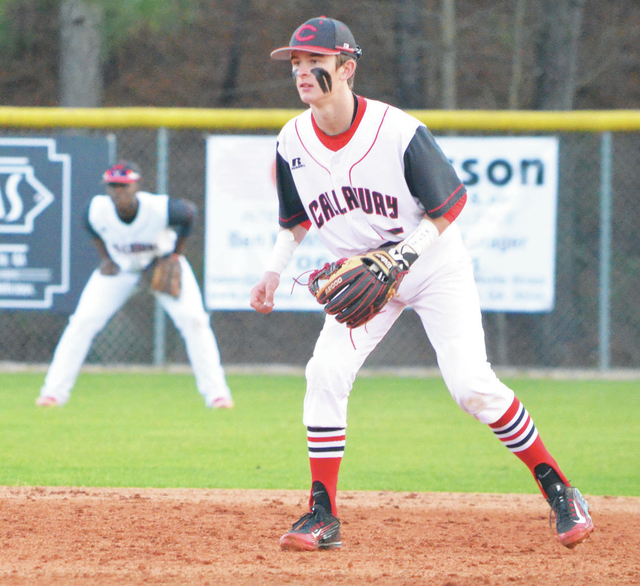 Callaway’s Devin Brock was on base three times and had an RBI during Thursday’s win over Manchester. Kevin Eckleberry | Daily News

http://lagrangenews.com/wp-content/uploads/sites/37/2016/02/web1_CHS8-1.jpgCallaway’s Devin Brock was on base three times and had an RBI during Thursday’s win over Manchester. Kevin Eckleberry | Daily News

Callaway’s Hunter Rollins watches a pitch sail out of the strike zone during Thursday’s game. Rollins not only pitched three hitless innings, but he was also on base twice. Kevin Eckleberry | Daily News

http://lagrangenews.com/wp-content/uploads/sites/37/2016/02/web1_CHS14.jpgCallaway’s Hunter Rollins watches a pitch sail out of the strike zone during Thursday’s game. Rollins not only pitched three hitless innings, but he was also on base twice. Kevin Eckleberry | Daily News

HOGANSVILLE – The game was in hand, but there was still a measure of suspense.

As Hunter Rollins made his way to the mound for the top of the seventh inning, Callaway had yet to give up a hit in the home game against Manchester.

Rollins promptly set Manchester down in order to finish off the no-hitter, and Callaway beat Manchester 9-0 to improve to 2-1.

Josh Hanson got the start and pitched four perfect innings, and Rollins worked three hitless innings to close the deal.

Callaway’s top three pitchers from a year ago have all graduated and are now playing college baseball, and Hanson is one of the players who’ll be counted on to fill that void this season.

Hanson said he and the other pitchers are ready for that responsibility.

“I’ve been waiting on this a long time,” Hanson said. “This is our time now. We’ve got to step up.”

Callaway head coach Dusty Hubbard was happy to see the pitchers putting the ball in the strike zone after the team struggled in that area in the previous three games, including a preseason game against LaGrange.

“We just had to do a better job of throwing strikes,” Hubbard said. “That’s something uncharacteristic of our pitchers. We’ve always thrown strikes. And we haven’t done that. Even in the game we won at Pike County, we walked eight guys. I thought we did a better job of that today.”

He faced 12 batters during his time on the mound, and he retired them all.

“That’s always my job as a pitcher is to throw strikes,” Hanson said. “If they hit it, they hit it.”

Rollins didn’t allow a base runner in the fifth or seventh inning, but he did run into some trouble in the sixth inning.

Taking advantage of two walks and an error, Manchester loaded the bases with two outs, but a nice defensive play by Callaway made sure the shutout remained intact

A pitch got past catcher Drake Wade, but the freshman hustled and retrieved the ball, and he flipped it to Rollins, who got the tag down for the third out.

That was part of a busy night for Wade, who began the game at shortstop before shifting to catcher when Hollins moved from behind the plate to the mound.

Callaway scored seven of its runs in the first three innings.

The Cavaliers manufactured a run in the bottom of the first.

Devin Brock led off with a single, and he later moved to third on a groundout by Xavier Smith before scoring on Dylan Johnson’s sacrifice fly.

The Cavaliers pushed two more runs across in the second inning.

Rollins got things started with a walk, and Slone Raper followed with a triple to bring in a run and make it 2-0.

After Hanson walked to put runners on the corners, Brock’s infield single brought in another run.

Hanson struck out the side in the top of the third, and Callaway busted it open with four runs in the bottom of the third.

Cortney Laye’s base hit jump-started the rally, and Ty McCann reached on an error.

Following a pitching change, Rollins reached on a bunt single, and the Cavaliers had the bases loaded, bringing Raper to the plate.

Raper hit the ball on the ground for an RBI, and two runs ended up scoring on the play because of an error.

Jordan Bonner’s sacrifice fly drove in another run, and after Hanson walked, Brock’s groundout brought in the fourth and final run of the inning, and Callaway had a commanding 7-0 lead.

That’s the way it remained until Callaway capped the scoring with two runs in the seventh inning.

Hanson reached on an error leading off, and Milton Turner followed with a base hit.

With two outs, Hanson and Turner both scored on a wild pitch to give Callaway a 9-0 lead.

Callaway will look to make it three straight wins when it hosts Shaw today at 5:30 p.m.

OF NOTE: For more photos from Thursday’s game, go to facebook.com/LDNsports