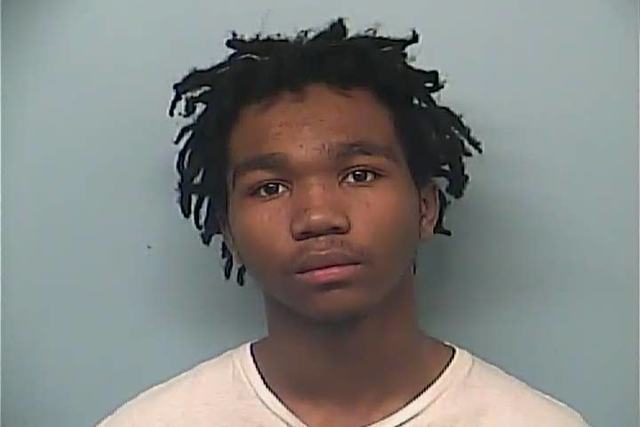 LaGRANGE — One of the men accused of robbing a couple at gunpoint inside their apartment made his first appearance Thursday morning in Troup County Magistrate Court.

Demarcus Jawan Parks, 18, of LaGrange, is charged with armed robbery, aggravated assault, possession of a firearm and seven counts of participation of criminal street gang activity.

According to LaGrange Police Detective Ley Wynne, on Feb. 4 at 5 p.m., one of the victims answered the door to his apartment at Lee’s Crossing at 119 Old Airport Road and was immediately hit with the butt of a firearm. The victim told officers six or seven men rushed in the door behind his attacker.

Wynne said the victim’s girlfriend and toddler were also inside the apartment at the time. The child suffered a seizure during the armed robbery, stated Wynne.

The suspects, including Parks, allegedly stole $1,500 in cash, a laptop, two cellphones, an X-Box gaming system, four pairs of shoes and some hats, Wynne testified.

The victim told officers the men fled on foot toward the Mallard Lake apartments on the other side of Old Airport Road. Wynne testified officers found a boot print near the 700 building where a LaGrange police K-9 tracked the robbers.

Wynne stated Parks’ name was brought up during their investigation. The victims also identified him in a photo line up, the detective added.

Investigators then served a search warrant on Parks’ home in the 1200 block of Mooty Bridge Road. They found Timberland boots in Parks’ bedroom that matched the impressions found at the crime scene, Wynne said. All the evidence was sent to the Georgia Bureau of Investigation crime lab for processing.

Defense attorney Jeff Shattuck asked Wynne if investigators found any of the items in Parks’ home allegedly stolen from the apartment. The detective said no.

Gang investigator Jarrod Anderson testified Parks is a known member of the Bloods street gang and committed crimes to “maintain and achieve his status as a gang member.”

Gang members like Parks were known to trade property or stolen items as a way to obtain guns, Anderson added. He alleged Parks was also involved in a Jan. 4 robbery.

LaGrange police Lt. Dale Strickland said about 6:40 p.m. Parks and a juvenile took a wallet, cash, ID and cellphone from a man walking on Elm Street.

Parks was out on bond for the Jan. 4 incident when he allegedly committed the Lee’s Crossing robbery, Strickland added.

A man accused of beating his ex-girlfriend in front of her children and relatives also made his first appearance in court Thursday.

Rodzinski Mondrell Tucker is charged with threatening a witness, burglary, simple battery, criminal trespass, six counts of cruelty to children in the third degree, battery and criminal damage to property.

LaGrange Police Officer Fredrick Montondo told the court he met Tucker’s ex-girlfriend at a home in the 400 block of Jefferson Street on Jan. 3. She told the officer Tucker walked into the house uninvited, yanked her outside and began hitting her in front of her children, nieces, nephews and other witnesses.

The woman stated the defendant then took her head and slammed it against a parked car, Montondo testified. She managed to get away as he punched a hole in the windshield of her car and kicked over the mailbox before leaving the scene.

The officer testified the victim sustained a large bump to her head and a gash to her hand.

LaGrange Police Officer Cpl. Craig Wheeler told the court he responded to a call involving the same victim and Tucker on Feb. 6 at a home in the 300 block of Johnson Street.

Wheeler said the victim told him she was in her bedroom when Tucker grabbed her from behind and told her to drop the charges in a case she had pending against him. The defendant threw her hard against the bed, breaking it and an oscillating fan, the victim told police.

Her two children woke up when they heard the commotion and walked into the room in the middle of the incident, she reported. Tucker then took off.

McWaters said Tucker was supposed to be in state court on Feb. 14 to face another charge of battery.