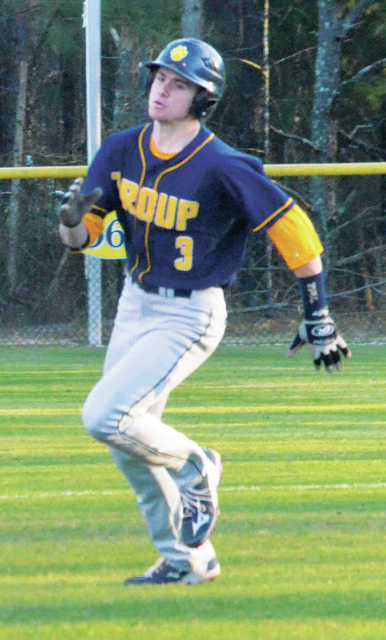 Bo Halcomb had four hits, including a triple, during Troup’s 8-2 road win over Auburn on Thursday. Kevin Eckleberry | Daily News

http://lagrangenews.com/wp-content/uploads/sites/37/2016/02/web1_halcomb.jpgBo Halcomb had four hits, including a triple, during Troup’s 8-2 road win over Auburn on Thursday. Kevin Eckleberry | Daily News

AUBURN – Bo Halcomb provided the offensive punch with four hits, and three pitchers got the job done as the Troup Tigers handled a talented Auburn High team 8-2 on Thursday.

The Tigers, who opened their season with an 8-4 win over Northgate last week, improved to 2-0 with the road win.

“On paper, they’ve got eight kids that have already signed, and four of them have signed Division I already,” Troup head coach Craig Garner said of Auburn. “That’s what I told our guys yesterday. On paper, they’re better than us. They’re supposed to beat us like a drum. But that’s why you don’t play it on paper. You go out there and play.”

Garner said his team did all the things it needs to do to be successful.

“We’ve got to do what we do, and do it well,” Garner said. “We worked the pitchers. We got them deep in counts. We got a few good hits, and we stole eight bags. We moved some runners over, and got some base hits out of it with them not being able to play the bunt. We put ourselves in positions to manufacture runs.”

The Tigers took control of the game early, taking a 5-1 lead after two innings, and that was plenty of support for Payton Upchurch, Neal Searels and Colby Darda, who all did a solid job.

Upchurch got the start and pitched four innings to get the win, Searels worked the next two innings, and Darda tossed a scoreless seventh.

In the bottom of the seventh, Darda gave up two walks to begin the inning, but he finished things with a flourish with three straight strikeouts.

At the plate, Halcomb was Troup’s leadoff hitter, and he played that role to perfection.

One of Halcomb’s four hits was a triple, and he also got it done on the base paths with three stolen bases.

Winston Turner had a double for the Tigers, and he also drove in a run with a sacrifice fly in the second inning.

Troup will look to improve to 3-0 when it visits the rival LaGrange Grangers on Tuesday.