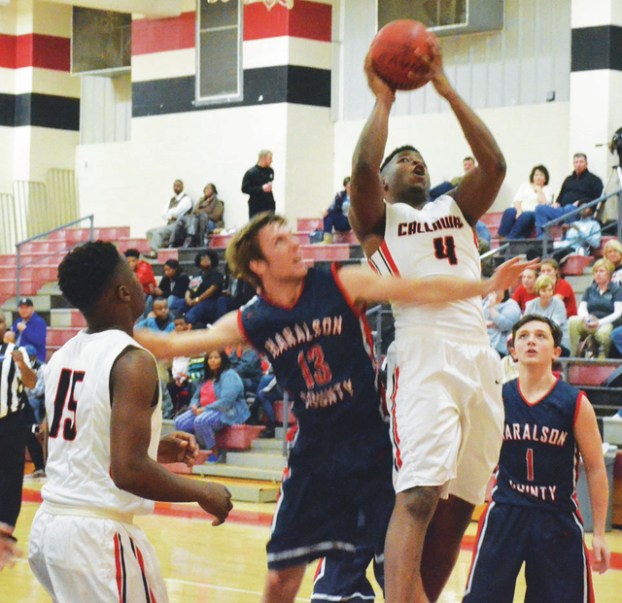 The Shaw Raiders had all sorts of base runners during Friday’s game against the Callaway Cavaliers, but only two of them touched home plate.

With the help of some outstanding defensive plays behind him, left-handed pitcher Dylan Johnson did a stellar job of getting out of trouble during the game, and Callaway hung on for a 4-2 home victory to improve to 3-1.

The Raiders had two innings where they went in order, but in the other five innings they had at least one person on base, and oftentimes they had multiple men on during an inning.

Johnson kept pumping in strikes and avoided the big inning, with Shaw managing just single runs in the third and fourth innings.

“That’s what we’ve been waiting on,” Callaway head coach Dusty Hubbard said. “We know he’s got the stuff. His stuff is great. It’s just getting command of the strike zone. That was a good game for him.”

A year ago, Johnson struggled a bit early in the season, mostly with his command, but it wasn’t a big deal for the Cavaliers since they had seniors Perry Keith, Kevin Craft and Cody Mimbs to carry the weight on the mound.

Those three players have all graduated, so Johnson knows the team is going to be relying on him this spring as well as some other pitchers who didn’t spend that much time on the mound last year.

“Last year I had a tough time pitching, and we were fortunate to have Perry and Kevin,” Johnson said. “We lost them to graduation, so I’m trying to step up and do the best I can for the team. We’ve got a bunch of good guys.”

The Raiders were close to breaking through for multiple runs in the third and fourth innings.

In the third, Shaw already had a run in when Kyle Pate lined a base hit to right field.

Callaway’s Xavier Smith charged the ball, scooped it up, and made a perfect throw to home plate, and catcher Hunter Rollins got the tag down for the third out of the inning.

“That was a great throw,” Hubbard sid. “That was huge. Who knows what the next guy does if we don’t throw him out there. He couldn’t have made a better throw. That was a big play.”

In the fourth inning, the Raiders pulled even with a run, and they had the bases loaded and no outs.

The Cavaliers got the first out on a forceout at home, and Johnson then got two strikeouts to get his team out of the inning with the game still tied.

After Devin Brock gave Callaway the lead with a two-run double in the top of the fourth, Johnson shut Shaw out the rest of the way, but there were some anxious moments.

Shaw had a runner on second with no outs in the fifth inning, but Johnson got three straight strikeouts to get out of that jam.

Then in the seventh and final inning, Shaw had two runners on with one out, but Johnson was up to the challenge again with two straight strikeouts to end the game.

Johnson said he tried not to let having so many men on base bother him.

“I just pitch the same way I would if they weren’t there,” Johnson said. “You don’t think about them, and you just focus on the batter and try to get an out.”

Callaway jumped out to a 2-0 lead with a pair of runs in the bottom of the first inning.

Brock led off with an infield single, and Noah Hammett followed with a base hit.

Two batters later, Cortney Laye knocked in a run with a groundout, and Ty McCann legged out an infield single to drive in another run and give Callaway a 2-0 lead.

After Shaw tied it, Callaway reclaimed the lead for good in the fourth inning.

Slone Raper beat out an infield single with one out, and Smith was hit by a pitch.

Two batters later, Brock ripped the ball over the right fielder’s head for a two-out, two-run double, and Callaway led 4-2, and that’s the way it ended.

Callaway will go for its fourth straight win when it visits Harris County on Wednesday.