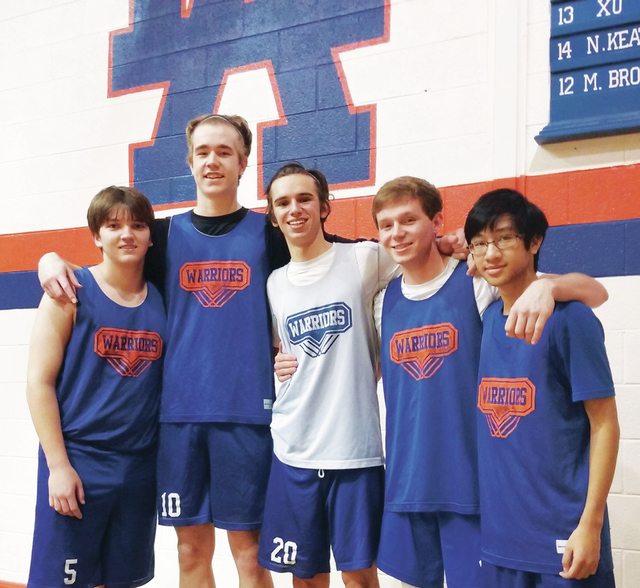 It has already been a fantastic season for the LaGrange Academy Warriors (17-8), who are one of eight teams left standing in the GISA Class AA state tournament.

For the seniors on the team, though, the work is far from done.

The Warriors want to capture a state championship, and they can take another step toward achieving that goal by winning today’s elite-eight game against First Presbyterian Christian Academy.

The game, which will be played at Bradwell Institute in Hinesville, will tip off at 4:30 p.m., and the winner will advance to the final four in Macon.

“There’s nothing better than coaching in a tournament. It’s awesome,” LaGrange Academy coach Britt Gaylor said. “And being with these guys makes it even better. They’re such a fun group to be around.”

This is the second time in three years the Warriors have made it to the state quarterfinals, but senior Zach Callaghan said the feeling is different than it was the last time.

“My sophomore year, we made it to the elite eight, but that year was kind of like we were the four seed going into it, and we upset a number one seed,” Callaghan said. “We were just happy to be in the elite eight. This year, we’re still so focused. We’re ready to keep going further. We’re not happy yet.”

The Warriors already have one state victory to their credit.

LaGrange Academy was up by nine at the half, and it ended up leading by as many as 21 points in the second half on the way to a 53-39 win.

Junior Lincoln Anderson scored 19 points and teamed up with senior Whit Moreman to control the post, and senior guard Will Trotter scored 13 points.

“If we play like we did (against Highland), I don’t feel like there’s a team that can beat us,” Callaghan said.

The Warriors are so effective in part because of their inside-outside balance.

Moreman, who transferred to LaGrange Academy before his junior season, routinely takes over games inside, and it’s rare that he doesn’t have a game where he reaches double digits in points and rebounds.

This season, Moreman has been able to play alongside Anderson, who transferred from Callaway High following his sophomore season.

While Moreman still usually has at least two defenders on him when he touches the ball, the attention on him isn’t quite as stifling because of Anderson’s presence.

“It definitely helps a lot,” Moreman said of having Anderson. “It helps take some of the pressure off me. I know I have another guy that can get 20 rebounds a night, and get 20-plus rebounds a night.”

A player of Moreman’s ability will still draw plenty of awareness from opposing teams, though, and he is fine with that.

If he’s not able to score himself, he excels at getting the ball to an open teammate.

“I kind of like it (the attention), because I can use it to find open teammates,” Moreman said.

While Anderson and Moreman patrol the interior, the Warriors have plenty of men who can hit shots from the outside, including Callaghan, Trotter, senior Mason Brown and junior Nick Keating.

Trotter, who had the hot hand in the first round against Highland Christian, said the ability to hit outside shots makes the Warriors a dangerous offensive team.

“It spaces things out, and our offense is just going to run more smoothly,” he said.

LaGrange Academy will need to have everything working to get past a strong First Presbyterian team that thumped Piedmont 92-49 in the first round.

Gaylor was able to see First Presbyterian play on Wednesday, and he was impressed.

“They’re athletic. They’re going to be as tough as any team we’ve played this year,” Gaylor said. “They’ve got three really good scorers. They’ve got one kid who’s a monster on the glass. Just talking to people, if you can handle their pressure, then you have a chance to stay in the game. That’s easier said than done. Their pressure gets after you.”

Moreman said the Warriors will go into the game with plenty of confidence, though.

“If all of us are together working as a team, it’ll be hard to stop us,” Moreman said. “We’re so deep. We’ve got the two big guys down low. We’ve got guys outside that can shoot it.”

While the Warriors won’t be satisfied unless they’re the final team standing, they are glad to be a part of the state tournament after missing out a year go.

The Warriors were beaten in the first round of the region tournament in 2015, denying them a spot at state.

“To me it’s a big deal,” Heath said. “It’s a huge accomplishment, especially after last year, losing in the region tournament.”

Now the Warriors will look to keep the good times going, and Gaylor is looking forward to the challenge.