‘Everybody was so helpful’ 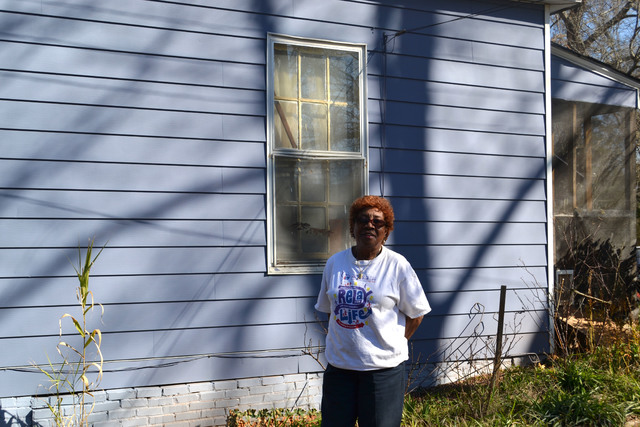 Mary Shephard stands in front of her home that was painted last year by a group of volunteers from Sewon for the annual Paint The Town event. This year’s event is set for May 31–June 3, and DASH is looking for homeowner applicants, volunteers and supporters.

http://lagrangenews.com/wp-content/uploads/sites/37/2016/02/web1_DSC_03171.jpgMary Shephard stands in front of her home that was painted last year by a group of volunteers from Sewon for the annual Paint The Town event. This year’s event is set for May 31–June 3, and DASH is looking for homeowner applicants, volunteers and supporters.

In May 2015, a group of volunteers changed Mary Shephard’s house and life.

Shephard was born and raised in LaGrange. She moved into her home in 1982 after her mother passed away, and she’s lived there for 34 years.

Her house is on the corner of Juniper Street, and she knew that passersby could see it.

“My flowers look good,” she said. “But I needed to make my house look good so I could have an eye-catcher.”

She knew she needed help, but she was afraid that she’d get ripped off or overcharged. So she applied for Paint the Town, an initiative started by DASH that helps homeowners paint their homes.

“I put in for it,” she said. “I met Laura (Breyfogle, Paint the Town coordinator). I think she’s the most wonderful person. I really appreciate everything she did for me.”

Although her home was scheduled to be painted in April, rain delayed the painting until May.

Because of the age of her house, volunteers from Sewon were initially afraid that the paint wouldn’t stick. But the color that Shephard chose worked, and they were able to paint. Her house was originally a baby blue, but she chose a new color she thought would tone it down.

“Everybody that came was real nice. Everybody was so helpful,” she said.

Not only did they paint her house, but they helped her straighten up her yard, which helped Shephard, who loves to garden. She calls the group from Sewon “good people.”

Shephard is “so appreciative” of everyone who helped her last year.

“When they couldn’t do it, they’re embarrassed,” she said. “It creates pride. You’re helping them with their dreams.”

The event starts a ripple effect in the community, organizers said.

“It’s an inspiration for greater citizenship,” Ben Wheeler, the community developer for DASH, said. “It brings people together.”

The event helps keep homeowners in their homes longer, Wheeler noted and some homeowners are encouraged by their insurance agencies to participate.

The late Frank Cox, then a DASH board member, started Paint the Town in 2005.

“He was an advocate for the community,” said Wheeler. “He wanted to create a program that had residents helping local residents.”

Cox was inspired by World Changers, a group that visited LaGrange and helped residents fix their homes, Breyfogle said. He felt that the community could do this for each other and they didn’t need outsiders.

“DASH was a good fit because we already had a relationship with the community,” Wheeler said. DASH is an organization that restores unsafe housing in LaGrange.

Wheeler estimated there are 400 volunteers every year, which means in its 11 year history, the event has brought in about 4,000 helpers. In order to raise money, different businesses raise funds or offer a matching grant. In the past, churches, companies and individuals have helped and DASH supplemented funds.

“Participation is a team-building event,” Breyfogle said. “It’s an event you can do without having a lot of experience, and it’s a bonding opportunity.”

Wheeler agreed, saying many of the people within companies get to know the people they don’t normally work with.

Some companies go above and beyond what is expected of them, Breyfogle added.

DASH will provide lunch and water for the participating teams. Teams provide supplies, while DASH supplies the paint.

The 2016 Paint the Town is scheduled for May 31 to June 3, and DASH is looking for homeowners, volunteers and supporters.

Although Paint the Town has previously painted homes all over the county, the event will focus primarily on homes in LaGrange this year.

Applicants must own a home in LaGrange and have a household income below $41,500 for a family of four. Rental and sub-leased homes are ineligible.

Any church, organization or company seeking information may contact Laura Breyfogle at 706-845-7235 or breyfogle@charter.net, or DASH at 1200 4th Ave. in LaGrange.