It’s another close one for Grangers 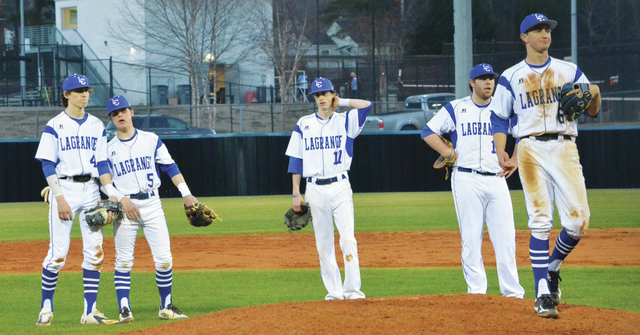 LaGrange’s Jake Howard warms up during a game earlier this season while the infielders look on. Howard pitched four innings during Friday’s 9-8 win over Woodland. LaGrange beat Locust Grove 3-2 on Saturday to improve to 3-1. Kevin Eckleberry | Daily News

http://lagrangenews.com/wp-content/uploads/sites/37/2016/02/web1_LHS4-4.jpgLaGrange’s Jake Howard warms up during a game earlier this season while the infielders look on. Howard pitched four innings during Friday’s 9-8 win over Woodland. LaGrange beat Locust Grove 3-2 on Saturday to improve to 3-1. Kevin Eckleberry | Daily News

Another day, another one-run game for the LaGrange Grangers.

After opening the season with a 9-2 victory over the Spalding County Jaguars, the Grangers have played three games since then, and they’ve all been decided by one run, and two of them went to extra innings.

LaGrange lost the first of those three games, falling to Central-Phenix City 18-17 in a wild game that lasted 10 innings.

On Friday, LaGrange bounced back to beat Woodland 9-8, and it followed that up with a 3-2 victory over Locust Grove on Saturday.

The past two games were part of a weekend road trip for the Grangers, who’ll be back home on Tuesday to take on the rival Troup Tigers.

“We were pleased,” LaGrange head coach David Smart said. “We went on the road and won two games, two one-run games. We didn’t play terrible, but we didn’t play especially well in some areas, but just to be able to fight and come through with two wins, that’s a testament to them. They did a really good job. Probably the best thing we did all weekend was compete.”

Smart felt it was beneficial for his team to get away for the weekend, spend a night away from home and play two close games against quality competition.

“It was good,” he said. “It was one of those things where you want to try to do it early in the year. You get on the road and spend the night, in case you have to do it in the state playoffs. It’s a good preparation. And on top of that, playing two close games against two good teams, it was good.”

In Saturday’s game, it was tied 2-2 in the 10th inning when Willis Kemp’s base hit drove in Champ Willis, who was running for Jake Farrar.

LaGrange got outstanding pitching from Ben Anderson and Matthew Anderson.

Ben Anderson started and pitched 4 1/3 innings, and Matthew Anderson went the rest of the way, and both of them only allowed one run.

“What Matt and Ben did today, we really needed that,” Smart said. “We did a great job of locating. It was really good for us.”

Offensively, Kemp had two hits, including the game-winner, and Matt Anderson and Farrar also had two hits.

Ben Anderson, Larkin Easterwood and Cole Freeman each had one hit.

In Friday’s 9-8 win over Woodland, Jake Howard did some nice work in relief to get the win, giving up two runs in his four innings on the mound.

Farrar was one of the offensive heroes, going 3-for-4 with three RBIs, and Howard had two hits and an RBI.

Ben Anderson had two hits, Easterwood and Jacob Vinson each had a hit and an RBI, and Kemp and David Sweat each had one hit.

After three straight road games, LaGrange will play back-to-back home games on Tuesday and Wednesday against Troup and Newnan, respectively.

“We’re excited to get back home and play,” Smart said.