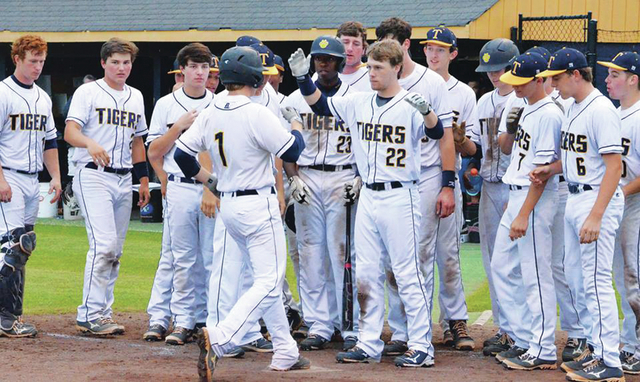 The Troup Tigers will put their 2-0 record on the line when they visit LaGrange today. Kevin Eckleberry | Daily News

http://lagrangenews.com/wp-content/uploads/sites/37/2016/03/web1_troup-baseball.jpgThe Troup Tigers will put their 2-0 record on the line when they visit LaGrange today. Kevin Eckleberry | Daily News

The LaGrange Grangers, fresh off a pair of one-run wins over the weekend, will host the Troup Tigers today, and it’ll be the only meeting of the season between the two rivals.

LaGrange and Troup are both playing well in the early going.

LaGrange is 3-1 after beating Woodland and Locust Grove, while Troup is off to a 2-0 start.

The game will be a part of a busy week on the diamond for the teams from Callaway, LaGrange and Troup, who will play eight games between them.

First up is today’s game at Granger Park.

Troup, which is ranked fifth in the most recent Atlanta Journal Constitution poll, went on the road and got an impressive 8-2 win over Auburn (Ala.) last week.

That came on the heels of an 8-4 win over Northgate in Troup’s season opener.

Against Auburn, Bo Halcomb had four hits including a triple, and pitchers Payton Upchurch, Neal Searels and Colby Darda combined to throttle a potent lineup.

“We’ve got to do what we do, and do it well,” Garner said. “We worked the pitchers. We got them deep in counts. We got a few good hits, and we stole eight bags. We moved some runners over, and got some base hits out of it with them not being able to play the bunt. We put ourselves in positions to manufacture runs.”

In the Northgate game, Troup had 12 hits, including a home run by catcher Brandon Gay, and sophomore shortstop Ryan Bliss had three hits with two doubles.

While Troup has had two relatively stress-free wins, LaGrange has been involved in three straight one-run games.

After beating Spalding County 9-2 in its season opener, LaGrange lost to Central-Phenix City 18-17 in 10 innings.

LaGrange then beat Woodland 9-8 before edging Locust Grove 3-2 in another 10-inning game.

“We’ve played four games, and two of them have been extra-inning games,” LaGrange head coach David Smart said. “It’s been a good test for us.”

On Wednesday, LaGrange will host Newnan, and Troup will have a home game against East Coweta.

They’ll be back in action on Friday, with Troup hosting Northside, and LaGrange hitting the road to play Sandy Creek.

The Callaway Cavaliers (3-1), who have won three in a row since dropping their season opener, will play two games this week, both on the road.

Callaway will visit Harris County on Wednesday before going on the road again on Thursday to play Manchester.

Last week, Josh Hanson and Hunter Rollins combined to throw a no-hitter in a 9-0 win over Manchester.

Callaway began the season with an 11-1 loss to Hardaway, but it followed that up with a 6-3 win over Pike County.

Following the win over Manchester, Callaway held off Shaw 4-2 on Friday, with Dylan Johnson getting the complete-game win.