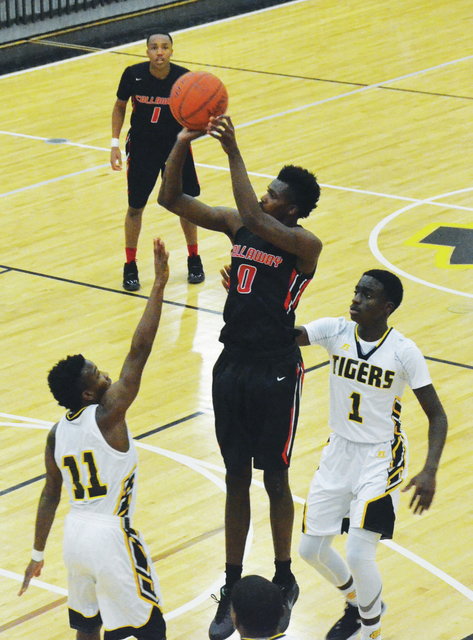 Callaway’s Dre Martin, who was the region’s player of the year last season, is a first-team all-region player this year. Kevin Eckleberry | Daily News

http://lagrangenews.com/wp-content/uploads/sites/37/2016/03/web1_CHS-martin.jpgCallaway’s Dre Martin, who was the region’s player of the year last season, is a first-team all-region player this year. Kevin Eckleberry | Daily News

For the second straight year, LaGrange High’s Derieko Smith has been selected as the Region 1-AAAAA boys’ basketball player of the year.

Callaway’s Braylon Sanders, meanwhile, is the Region 5-AAA player of the year, one year after his teammate Dre Martin earned that same honor.

Smith capped his high-school career with a terrific senior season, and when it came time to choose an all-region team, the coaches had no trouble deciding who the best player was.

Smith, a left-handed shooting guard, came through with an electryfing performance in his final high-school game, although it wasn’t enough to keep LaGrange from falling to South Paulding in the second round of the Class AAAAA state tournament.

In the first half, Smith managed just five points, all on free throws, but he exploded for 18 points in the second half to finish with 23 points in the 62-60 loss.

LaGrange’s LaPerion Perry, a junior guard, was a first-team selection on the all-region team.

Perry and Smith have been playing alongside each other at LaGrange for three seasons, and they have been a dynamic guard tandem, and LaGrange head coach Mark Veal said they’ve both been a joy to coach.

“It’s been an honor to coach Rico for these past four years,” Veal said. “And we’ve had LaPerion for three years, and now we get him for another year. They’re great basketball players. We’ve based our offense on having both of them out there.”

A year ago, the Grangers made it to the elite eight of the state tournament, and this season they were one of the final 16 teams still standing in Class AAAAA.

Smith is a four-year starter for LaGrange, and Perry will end up starting for four seasons as well.

“They’ve definitely excelled at LaGrange High,” Veal said. “They’ve had a lot of help from the outside. They’ve had their AAU coaches who have been instrumental in their success. Even playing football here, the football coaches have been instrumental in developing them as young men. And they’ve got some trainers they go see, and they help, too. They’ve both been raised good. They’ve got good family support systems.”

Veal said Smith is still exploring his different collegiate options, while Perry is being heavily recruited as a football player.

Perry, who was LaGrange’s quarterback last season, has received offers from Cincinnati and Tulane.

Sanders, like Smith and Perry, stepped right into the lineup when he was a freshman, and he has been an impact player for the Cavaliers for three years.

The 6-foot-2 Sanders is just as comfortable taking the ball strong to the basket as he is knocking down 3-pointers, and in his final game, he scored 21 points in a 79-73 loss to South Atlanta in the second round of the Class AAA state tournament.

While Sanders’ skills on a basketball court are easy to recognize, his future may be on a football field.

Sanders, who excelled in his first season at quarterback last season, is being heavily recruited as a wide receiver, and he has received an offer from the University of Georgia.

Sanders was joined on the all-region team by three of his teammates, including Martin, who was picked as the region’s top player a year ago.

Martin enjoyed a phenomenal career as a football and basketball player at Callaway.

He was a four-year starter in both sports, and he was a part of seven region-championship teams, as well as numerous teams that enjoyed extended stays in the state tournament.

Patillo had a big-time effort in his final game, scoring 19 points in the loss to South Atlanta, and he was a force in the paint all season.

Also earning an all-region nod for Callaway was senior post player Joe Brown, who had 11 points in the South Atlanta game.

Brown was also a standout wide receiver for the Callaway football team.

Also for Callaway, Milton Turner made the region’s all-academic team.