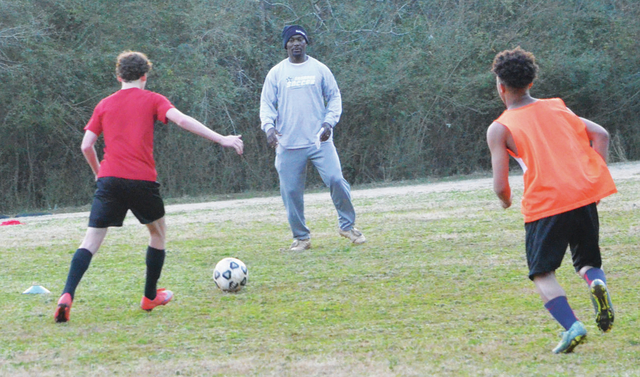 LAGRANGE – As the LaGrange Grangers prepared for their region opener a year ago, they were a veteran, senior-oriented team.

That LaGrange team featured more than 10 seniors, all of whom occupied a major role on the team.

Flash forward a year, and the situation is obviously a lot different as LaGrange gets ready for its first Region 1-AAAAA game.

Gone are the 12 seniors who were the foundation of last year’s LaGrange team, and in their place is a mostly new group of contributors, although there are a handful of veterans remaining.

On Monday afternoon at Gardner Newman Middle School, LaGrange High head coach Keita Placide was working with his players, getting them ready for Wednesday’s region game at Northside.

As the team scrimmaged, Placide would bark out advice or encouragement, and he would often stop play to bring the players together and point out something they should be doing differently.

“It’s more teaching. It’s breaking bad habits, and talking,” Placide said at the close of practice on Tuesday as the sun dipped behind the trees behind the Gardner Newman football stadium where the Grangers are playing many of their games this season. “I have to stop practice every two to three minutes to say, hey, the objective we’re trying to get is this, or this, or this.”

Placide said it’s a day-by-day process as the players gain confidence and feel more secure in what he’s trying to teach them.

The Grangers have played four regular-season games so far, and they have a 1-3 record.

In their one win, LaGrange fell behind 1-0 against Kendrick before rallying for a 5-2 win behind a pair of goals from one of the newcomers to the lineup, Yeison Diaz.

Robert Reese also had a goal, as did senior Matthew Thomas, who has the most varsity experience of any of the LaGrange players.

Last spring, Thomas wasn’t counted on to be one of the leaders on the team.

He didn’t need to take on that role, not with so many seniors.

Things are different now, and Thomas is making an effort to be a leader, to help bring some of the more inexperienced players along.

“I’ve been talking so much more than I did last year,” said Thomas, who will be going to LaGrange College to play football and soccer. “All the seniors directed me, told me what to do. Now, I have to do that, what they were doing. I’m not used to that. I’m learning more and more every day, to talk, to vocalize, to be a leader.”

The Grangers opened the season on Feb. 4 with a scrimmage game against Newnan, and Thomas said the team has come along way since then.

“We’ve come together as a team,” Thomas said. “We’re playing, talking a lot better than we did at the beginning of the year.”

The Grangers will need to keep improving to compete in a region loaded with quality teams, including Wedneday’s opponent in Northside.

“It’s going to be tough,” Placide said. “Shaw jumped out ahead. Columbus is right there. But we’ll compete.”

The Lady Grangers have been short-handed so far, with three of its top players dealing with injuries, including Maggie Asbell, who is out for the season.

Maddie Patton and Reagan Peters have also had injury issues, and when they return they’ll provide a major lift.

LaGrange’s teams will be at home on Friday to play Smith’s Station (Ala.).

Also this week, the teams from Callaway and Troup will begin their region schedules.

Callaway’s teams will visit Rockmart today for their first Region 5-AAA games, and they’ll be back home on Thursday to play region foe Pepperell.

Troup’s teams, after visiting Opelika today, will play their Region 5-AAAA openers on Thursday at home against Woodward Academy.