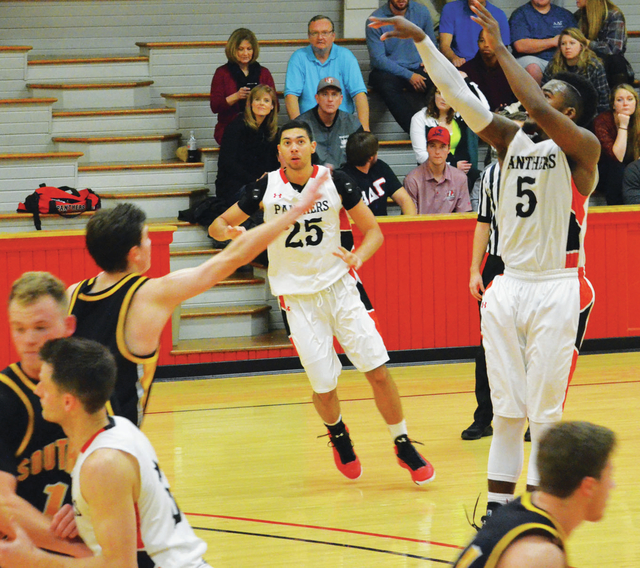 LaGrange College senior guard Braxton Ford gets a shot away during a regular-season game against Birmingham-Southern. Those same two teams will meet on Friday in the first round of the NCAA Division III tournament. Kevin Eckleberry | Daily News

http://lagrangenews.com/wp-content/uploads/sites/37/2016/03/web1_panthers6.jpgLaGrange College senior guard Braxton Ford gets a shot away during a regular-season game against Birmingham-Southern. Those same two teams will meet on Friday in the first round of the NCAA Division III tournament. Kevin Eckleberry | Daily News

When the LaGrange College Panthers lost to Covenant in overtime on Saturday in the USA South championship game, they lost out on their chance to earn an automatic invitation to the NCAA Division III national tournament.

All hope wasn’t gone, though.

Because of the strong season they’d put together, the Panthers were one of the teams in the running for an at-large invitation to the tournament.

On Monday, the Panthers gathered together to learn their fate, and they watched as the bracket was revealed.

After six of the eight teams in the Emory regional were announced, LaGrange College appeared at the bottom of the bracket, and the celebration was on.

LaGrange College will play Birmingham-Southern on Friday at 5:30 p.m. at Emory University in Atlanta, with the winner advancing to face either Emory or Covenant in the second round of the NCAA tournament.

“We were nervous and confident that we would be selected for the NCAA tournament,” LaGrange College head coach Kendal Wallace said. “We scheduled the best teams we could find and I believe that worked in our favor. Also, the USA South conference was very strong this year which helped immensely. Our players have played their hearts out this season and deserve this opportunity.”

LaGrange College, which lost to Covenant 101-92 in overtime in the USA South title game, brings a 20-8 record into the NCAA tournament.

Five of the Panthers’ games were against other teams in the Emory regional.

On Dec. 2, LaGrange College beat Birmingham-Southern 88-80 in overtime, with former LaGrange Granger Justyn Olson scoring what was at the time a career-high 29 points.

LaGrange College and Emory also played once, with the Panthers prevailing 91-86 on Nov. 29 in the Maryville (Tenn.) Classic.

Senior guard Mark Wagner led the Panthers with 24 points in that game.

LaGrange College and Covenant have played three times, twice in the regular season, and then in the conference-title game.

In Saturday’s championship game, LaGrange College rallied from 19 points down in the second half to force overtime, but Covenant went on to win.

Wagner scored eight points in the final minute of regulation in that game, and he led the Panthers with 26 points.

In the regular season, LaGrange College won at Covenant 73-64, and it prevailed in the rematch at Mariotti Gym 76-65.

In the first game, Olson paced the Panthers with 15 points, and senior guard Ford scored 21 points in the rematch.

This is LaGrange College’s third straight trip to the NCAA tournament, and it fell short in the first round the past two years.